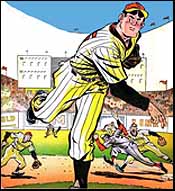 It’s spring training for baseball, a time when even Cubs fans can be hopeful despite knowing that, sooner or later, this year’s team will break our hearts as every Cubs team has done for over a century. Truth is, if the Cubs ever won the World Series, their mystique would be gone. Their legend is based on being losers.

As baseball season is upon us, and tonight is the Academy Awards, I want to look back not only at the game but at my favorite baseball movies. For my taste, there is something better about baseball films than there is in films for any other sport. There’s a duality to it; baseball is played by teams but it comes down to individuals – batter versus pitcher.

So here, in no particular order, are my favorite baseball films. I’m not saying they’re the best but they are my faves and I think every one of them is watchable. These aren’t the only baseball films I like and the list may not include your faves but there’s only so much space.

Moneyball stars Bard Pitt in his Oscar nominated role; the nomination is well deserved although his pal, George Clooney, will probably beat him out for the award. The movie does not deal with the game per se but with the business behind the game, focusing on Oakland A’s manager Billy Beane as he attempted in 2002 to win the World Series despite having very little money to work with. At the same time, it has most of a baseball film’s tropes – a team that has little chance, a maverick at the center of the story, a shot of redemption and so on. It comes at everything from a different angle but very worthwhile.

The Natural. Okay, it’s pretentious, it’s overwrought in places, heavy on the symbolism, Robert Redford at the start of the film is too old to be playing a rookie phenom and maybe even the score is over the top. For me, it works. When Roy Cobb hits the light-shattering home run at the climax and the Randy Newman score comes to its symphonic heights, I get chills. I stumble on it on the tube, I watch it all the way through. Great cast, too.

Bull Durham. Great comedy, great romance, sexy as hell, and terrific performances. Focusing on a minor league team is a great idea – players on their way up, players on their way down, players who aren’t going to get any better than this. Human, humble, great baseball scenes, loopy as hell. Costner, whatever else you may think of him, is almost always good playing an athlete and especially a baseball player. He does another great job playing a baseball player in a supporting role in The Other Side Of Anger. This is my second fave baseball movie.

A League of Their Own. “There’s no crying in baseball!” Tom Hanks, that line, and that scene alone merits the film’s inclusion here. Incredible cast overall – Geena Davis, Hanks, David Strathairn (almost always a MVP no matter what movie he is in), Madonna, Rosie O’Donnell and Jon Lovitz in what may be the film role I most enjoy him in. Or enjoy him in at all.  The movie also covers a story I didn’t know about – a women’s professional baseball league in the 1940s while World War II was on. A little sentimental here and there, but first class. Makes you wonder why there isn’t a womens’ professional baseball league today. Maybe we haven’t come a long ways, baby.

The Comrades of Summer. I’d be surprised if most of you knew this one. It was a made for TV movie in 1992. Personal bias – it stars Joe Mantegna who I knew back in my theater days in Chicago. Great guy and a wonderful actor. In this movie, he plays Sparky Smith, a resentful and recently fired baseball manager in the States who gets hired by the Soviet Union that wants to field a team for the upcoming Olympics where baseball will be a competitive sport for the first time. He’s resentful, the players are largely untrained and well nigh hopeless and the odds are long. Classic baseball film material. Aside: there’s a Russian street hustler, Voronov, in the movie who contributed more than a little to my creation of Vilmahr Grahrk in some of my Star Wars stories for Dark Horse.

Field of Dreams. My favorite, hands down. I came at it sideways. When it was first released, I had no interest in it. Then I heard the soundtrack playing in a friend’s car. I didn’t klnow what it was and my friend identified it for me. James Horners’ score for this film is one of my top five favorite scores of all times. Beautiful and haunting. The film hit one of the rerun movies houses in Chicago (the old Three Penny Cinema of fond memory; it’s now a rock joint called Lincoln Hall) and I wanted to see how the music worked with whatever the film was about. So Kim and I went.

Knocked. Me. Out. It has the element of mysticism that The Natural strived for but not so heavy handed. It has James Earl Jones playing a J.D. Salinger type character (in the book by W.P. Kinsella – it was called Shoeless Joe – from which the film was adapted, the character is J.D. Salinger) and Burt Lancaster in a warm and wise small part. Once again, Kevin Costner is the main character, Joe Kinsella, which he handles with humor and heart.

The film is about baseball, yes, and James Earl Jones has a terrific speech towards the end about the importance of baseball and the dreams it has. It’s about redemption and long odds and, most importantly, fathers and sons. The ending is perfect. “Want to have a catch?” I think every father-son relationship is imperfect (yes, probably every father-daughter one, too) and I tear up every time when that final scene plays out. It ends in hope and beauty – just as every baseball season begins in hope and perhaps some beauty.

There’s a few more I’ll mention in passing – the TV version of Bleacher Bums (not the movie version), performed by the original Organic Theater cast including the aforementioned Joe Mantegna. This is the definition of what it means to be a Cub’s fan. “No one ever went broke betting against the Cubs after the Fourth of July.” Soul of the Game about the Negro Leagues just as Jackie Robinson was about to break the color line. Delroy Lindo, Mykelti Williamson (currently seen in this season’s Justified) and Blair Underwood as the young Jackie Robinson. Great stuff. Dennis Quaid in The Rookie. Sort of The Natural without all the mystical hoohah. And the musical Damn Yankees for Gwen Verdon, Ray Walston, and the song (You Gotta Have) Heart. That’s baseball right there.

I think what unites all these films is a sense of redemption and of hope.  You need hope to get through life, even if you know better, even if you know that, in the end, your heart will get broken. Again. That’s what you have at the start of spring training, that this might be the year. Miracles happen. The Cubs might do it. I like myself better when I hope.