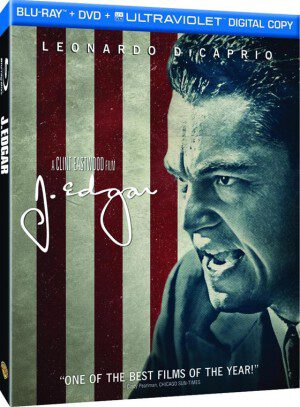 J. Edgar Hoover has been demonized for his many excesses and lapses during his distinguished career as director of the Federal Bureau of Investigation. He seemingly turned a blind eye to organized crime after Prohibition ended, focusing instead on gaining information to use as leverage against political rivals and rooting out Communism long after it stopped being a domestic threat. What few appreciate is that he was the figure to move law enforcement from a collection of theories to a disciplined, trained force that embraced forensics and dogged detective work to build cases against their suspects.

Clint Eastwood took on an examination of this complex figure in J. Edgar, a deeply flawed film that was released in the fall and is out now on disc from Warner Home Video. The movie is constantly shifting from Hoover’s early days as a fed to the 1960s and the time frame jumps proved jarring as you needed a snippet of dialogue or visual clue to figure out if it was 1932, 1963 or 1968. The screenplay, from Dustin Lance Black, bookends the man’s career but we the audience are left wondering what happened between the election of Franklin Delano Roosevelt and the presidency of John F. Kennedy. Surely, Hoover and the FBI did something of note during this era but there’s not a single clue. 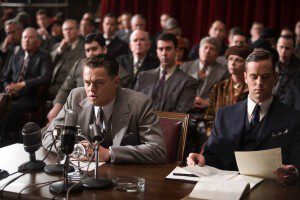 Black tried to show us all the sides of Hoover, the button-down conservative raised by a strong-willed mother (Judi Dench in a thankless role); the closeted homosexual who couldn’t bring himself to have a fully physical relationship with his right hand man, Clyde Tolson; the nation’s number one cop who centralized fingerprinting and used science to find criminals; and the power-hungry political figure who used whatever dirt he could manage to find in order to retain his power and intimidate others to acting in his best interests. 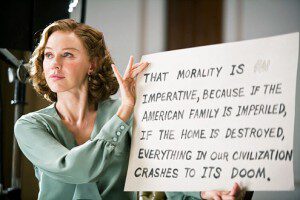 The problem, though, is that none of these are fully fleshed out so we’re still left wondering who was John Edgar Hoover and how did he get that way? Eastwood was smart to cast Leonardo DiCaprio for the title role, since the actor is superb in the role, giving us shadings and hints. He’s aided by some excellent makeup, costumes, and a strong supporting cast. Interestingly, his relationship with secretary Helen Grandy begged for the spotlight. Grandy was there from his beginning and was there to destroy the confidential files within hours of his unexpected death, depriving the incriminating information from being obtained by Richard Nixon. Naomi Watts loses herself under the makeup and is a beacon, showing us who might really have controlled the flow of information, making Hoover the stud lawman the public adored. 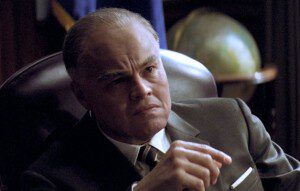 The makeup may have helped us believe DiCaprio was Hoover and Watts was Grandy, but it looked terrible on Armie Hammer, hampering his nuanced performance of the loyal right-hand man and longtime companion. His shunning the spotlight for decades was interesting but made us wonder who he was and what was the appeal between the two men?

Eastwood, who did a better job with composing the score than in making this a strong movie, may have bitten off too much material for a single film. As a result, we’re getting bits and pieces of other potential films. The one major case covered from beginning to end was the kidnapping of Charles Lindberg’s baby, a national story that used forensics to track down a suspect, Bruno Richard Hauptman, and how that very evidence was used as a bludgeon when doubts were raised about his guilt. (For the record, some believe the baby corpse found was not the Lindberg child or that Hauptman was actually innocent.)

The movie’s somber color palette transfers nicely to the Blu-ray disc and sounds great. The sole extra contained on the disc is an 18-minute featurette J. Edgar: “The Most Powerful Man in the World”, a standard production piece with cast and crew talking about the subject.