MINDY NEWELL: What Would Wonder Woman Do? 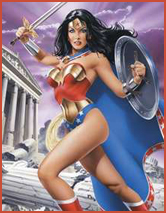 On Thursday, February 16, 2011, in an interview with MSNBC’s Andrea Mitchell, Foster Friess, one of the billionaire funders of the Super PAC (Political Action Committee) backing Rick Santorum, said, “Back in my days, they used Bayer aspirin for contraceptives. The gals put it between their knees, and it wasn’t that costly.”

Watch this video from The Daily Show in which Jon Stewart masterfully attacks the crap coming out of the Republican’s mouths these days.

The Republican Party has really stepped in it this time. They are so desperate. It would be funny if it weren’t so scary. Now they’re trying to switch the argument into one in which Obama is attacking Catholics. According to the Republicans, Obama has been a Muslim plant, a communist, and a socialist, a Kenyan (as in not born on American soil), anti-Christian, anti-Israel…

Several columns ago I talked about why I believed that Wonder Woman, a.k.a. Princess Diana of Themiscrya, would come down on the side of pro-life in the abortion debate.

I never considered about how she would feel towards the use of contraceptives.

What I think is that, at first, she wouldn’t understand it. As I said, coming from a place where natural procreation has been unknown for 3000 years and more, Diana would have a true reverence for pregnancy and birth – not to mention children.

However, as she became acclimated to the modern world – I don’t use the word “assimilated” because it is my writer’s conceit to think of Diana as a continual “stranger in a strange land.” I believe she would come to accept the importance of a “woman’s right to choose” contraceptives, based on her own experiences growing up on a island in which there are no men to place a “glass ceiling” on women’s abilities and/or aspirations. After all, her own mother, Hippolyta, is Queen in every sense of the word, a queen with the power of a king, such as this world has not seen since Elizabeth I of England. In Diana’s world, there is no question that a woman has the capability to be a front-line warrior or a priest – it’s a fact. It just is.

And I also think she would come to realize that using contraceptives – obviously – drastically eliminate the need for abortions. Yes, I still believe she would stand firm in her pro-life stance.

A final point. Diana comes from a theocratic society. However, it is an enlightened theocratic society that does not impose its religion on others. I believe she would find it inappropriate that those campaigning for the Presidency of this country are actively working to impose their faith’s beliefs on others.

TUESDAY: What Would Michael Davis Do?