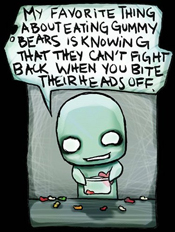 Opinions are like assholes. Everyone has one. Every asshole has lots of opinions. What comes out of assholes frequently is a load of shit. Check the GOP Presidential debates for verification.

I encountered a fan (well, not really a fan of mine) who wanted to tell me why I sucked. My basic response was: I should care because –? This offended the would-be critic; s/he had bought a book of mine and had a right to his/her opinion. I didn’t dispute that; the real question was – why should it matter to me? The fan got huffy; he/she/it thought I should want to hear that opinion.

Experience is a good place to start. Has the person giving you the opinion any experience in the field on which they are opining?

Does the opinion expressed have any facts to back it up? Real, verifiable facts, not ones made up to fit the circumstance (again, GOP presidential candidates; hell, all political candidates). Does it have some thought behind it? If they just want to express how they feel – okay, it’s how they feel but there’s no reason I should listen to it because there is no reason in it.

What is your experience with the person giving his/her opinion? Is it your history that you can trust, to a greater or lesser degree, what they’re saying? If I go to a movie and I read a review that mirrors my experience, then I know I can trust that critic’s opinion. It’s not that their perfect or that I am but I know our tastes are similar enough to make it less likely that I’ll waste my money.

Friends, relatives, colleagues – I know who they are and how trustworthy their opinion is on a given subject. We don’t have to agree, but I can listen with confidence. What they feel about it may be important to me but it’s because I know them. A stranger – well, not so much.

Also, just because someone knows something on one subject doesn’t mean they know anything on another. Come to me for an opinion on writing, story, or comics and I may have some thing useful to say. Ask me about NASCAR – well, I saw the Pixar flic Cars. Take anything I have to say on the topic with a lot of salt.

Editors – if I want to stay employed, I’d better listen to their opinions. I may disagree and I may express my disagreement but, in the end, the editor represents those who own the property or the rights so, unless that owner is me, I need to heed their opinions – even when I disagree.

Listening to opinions with which I disagree is important in general. I may not change my mind (or change the speaker’s mind) but I often walk away with a better insight into the opposing view and it can hone my own thoughts and opinions; I know better why I have the opinion that I do. These days, fewer and fewer people seem to do that. We look for only those who reflect our opinion, who agree with our dogma. Dogma is easy; no thought required.

We also should consider why we are being gifted with this person’s opinion. It’s the basic question a writer asks of his/her characters – what do they want? What’s the reason behind what they are doing? Does the person giving you their opinion care about you, do they want something from you, both, neither, more?

My mother was always of the opinion that I should get a teaching degree so I would have “something to fall back on” if my theater or (later) writing career didn’t pan out. I loved my Mom and I knew she was trying to look out for me but underlying that suggestion was her opinion that I wouldn’t make it in the field I chose. I knew that if I had something to fall back on, I’d fall back. Sometimes you have to perform without a net.

We are constantly bombarded with opinions these days and it becomes easier to take someone else’s opinion for our own. The issues are so complex and there are so many compelling issues vying for our attention that it’s easier to latch on to some pre-made opinion than to form our own. The times, however, demand we do the thinking necessary or, at the very least, know whose opinions we listen to and why.