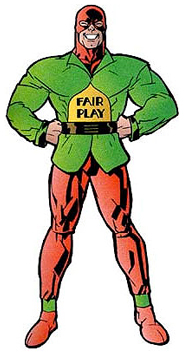 Hot off the lips of far better men and women than I (aka all the other ComicMix columnists) comes a little discussion weighing in on all this legal mumbo-jumbo going on in comic-book-land. Not to be outdone (remember when I lit a wee fire under Michael Davis a few weeks back?), I figured I’d let loose a few witticisms on the injustices being faced by far too many comic creators these days. Or just as every week, I’ll bury my foot in my mouth making wild assumptions, and asking dumb questions. Either way, you’re entertained… right?

For those not following the drama, read a few posts (such as here and here) and catch up. Basically Gary Friedrich got torched by Marvel for having the gall to turn a pocket out to them now that Ghost Rider is making them a few greenbacks. Gary isn’t alone in doing this. The creators of Superman did it. The family of Jack Kirby did it. And even over in the land ruled by Robert Kirkman, his longtime friend is doing it. And in all the cases, there seems to be a very simple precedent: When the check was cut to these creators for their initial involvement, signing it waived their rights to own their creation. Before the 1980s these checks had the contract right there on the check. I assume in the Kirkman case there were contracts and papers and lawyers, etc. In any event, for a small-time creator like myself, it’s scary and sad to read. A large part of me is angry. A smaller, more Jewish part of me is saying “Didn’t they know what they were signing?”

Please note, I am Jewish. So, it’s cool for me to go there.

Honestly, I’m torn on the subject. On one hand you’d figure that the person who did the legwork creating something should see the eventual fruit of their labor, when the money starts flowing. Would Marvel or DC be anywhere near as big as they are right now without the hard work and creativity of guys like Jack Kirby, Bob Kane, Bill Finger, Stan Lee, Jack Kirby, Steve Ditko, and the rest? The short answer: Hell No!

Creating a character that becomes a cultural icon, even for five minutes, takes real skill. And a suitcase of money doesn’t make Spider-Man’s rogues gallery, or designs Superman’s iconic costume. When the profits from the Spider-Man franchise, or the Nolan Bat-Franchise started rolling in, is it wrong to think that the person who initially created the character be able to see a little cash come their way? Certainly, as a compassionate person, I say of course. I’m not looking to be a communist here, but seriously, are a few shekels sent to the Mr. Friedrich when Nic Cage’s movie sells a few pairs of Underoos really going break Marvel’s bank? I doubt it.

On the other hand… if the paperwork is all signed, these creators are up a creek without a paddle. When I signed on the dotted line for my car, it’s mine. Even if I hate it the second I take the keys from the salesman… I’m stuck with it. Not a perfect metaphor, but I think my point is clear enough, no? When Gary, or any of the aforementioned creators were given their assignments from their editors… was there not a discussion about compensation? Assuming there was, it’s really on the head of said creators to know exactly what they are getting into. At the end of the day, if you sell your soul to the Devil, there’s no way out of Hell. Even if everyone agrees that you got screwed. It’s your name on the dotted line, and it’s your duty to read every word above it.

Face facts, no comic book artist or writer I know is living in a mansion, with extra money flowing out of their pockets. The fact is as I write this very column, I’m scouring Craigslist for freelance gigs in hopes of earning a few more bucks so I don’t have to send my wife back to work, so we can barely pay for daycare for our son (who is only a few weeks old). If Marvel or DC came calling at my door right now and told me they wanted to offer me a book, I’d sign papers so fast they’d need a fire extinguisher to cool my hands off.

Why? Money. I need it. They have it. And I’m safely assuming most anyone working in comics before me was in the same position. And therein lies the problem. The bigwigs behind these publishers have all shared the same evil grin behind their creators’ faces. Having the rights to the characters means raking in all the money from all the avenues open to said characters. Movies, TeeVee, T-shirts, action figures, sippy cups, night lights, toothbrushes, online fan club memberships, cereal, and oh yeah… comics. There’s no doubt in my mind that those with the cash have maintained the mentality that it’s their money, and they’ll hold onto it by any means necessary.

At the root of all this is the human factor. Money doesn’t grow on trees, and when you need to pay a bill, you do what you have to do to pay it. If the check is sitting on your desk, and all that stands between your next meal is your integrity, do you starve with a belly full of pride? Do you go the route of Robert Kirkman or Mike Mignola, and take your million dollar ideas to places where they let you keep your soul? Well, it’s different for everyone in comics. And when the good guys like Paul Levitz (see John’s column) step down, who will be there to fight for the little guys? Cause let’s face it… the second someone turns heels and walks away with their idea, there’s a line out the door and around the block of people waiting for a chance to walk right in.

And I’ll be damned if I’m not one of them.