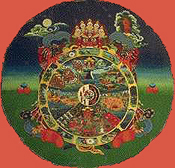 You guys know what the word “bardo” means, right? You don’t? Oh gosh, I’m sorry. Last week I threw a Catholic factoid at you and this week I’m hitting you with something from Tibetan Buddhism which, for pity sake, isn’t even Christian! (What is wrong with me? Why can’t I just pass the test, toss the text, and cruise down to Steak’n’Shake like the rest of the kids?)

Never mind. Here is a definition of “bardo” provided by my favorite oracle, Wikipedia:

The Tibetan word Bardo means literally “intermediate state“ – also translated as “transitional state” or “in-between state” or “liminal state.” Used loosely, the term “bardo” refers to the state of existence intermediate between two lives on earth…The term bardo can also be used metaphorically to describe times when our usual way of life becomes suspended, as, for example, during a period of illness…

The jury is still out – way, way out – on the “two lives” business, but the bardo concept is a useful expression of something most of us experience, sometimes often. The in-between place. The “what-happens-next” region.

This time of year is bardo territory. Between the seasons. Between warmth and cold. Holidays are past and…now what?

My personal bardo? Well, last fall the Brigade of Evil Kidney Stones attacked and sent me to the hospital four times and resisted counterattack – we’d say “valiantly” if they were the good guys. State-of-the-art medical science has been only partially successful against them. I imagine the last one, who may or may not be still lurking in my innards – the X-Ray is yet to come – standing boldly and snarling, You throw sonic waves at me, puny mortal? I spit on your sonic waves!

Doctor Doom, eat your heart out.

I began teaching my NYU course last week, thus hauling myself from the between-semesters bardo.

The world of comic books is also emerging from a bardo, kind of. DC’s relaunch of its entire superhero pantheon is past. The new stuff is making its way apace, with, already, a few casualties and a few replacements. Both DC and Marvel seem to be doing some kind of reorganization. (Full disclosure: This is a guess – less than a guess: I couldn’t be further out of the loop if I lived on Pluto.) The effect of the new technology on our favorite narrative medium is still a big question mark. (By the way, I’m having difficulty learning about said technology. Wonder why.)

It’ll all be resolved, soon or late, and the bardos will come and go…

But look! Down there! The space between the end of this column and the beginning of the next! What the heck is that? Do you think it could possibly be…?

RECOMMENDED READING: I first encountered the word “bardo” as part of a title “The Bardo Thodal, often translated as “The Tibetan Book of the Dead.”  My sketchy understanding of it is that this is a set of instructions for the newly dead to help them negotiate the afterlife. It had a vogue among the counterculture in the fabled Sixties and then dropped off my radar. So maybe this is not a recommendation, but rather a mention; now you know the thing exists.