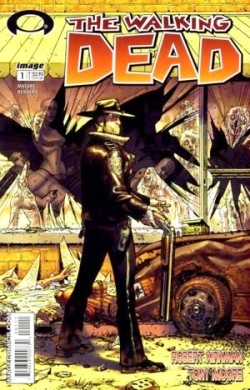 With The Walking Dead returning to AMC tonight, there could be an even bigger threat to the series as we know it: Original artist Tony Moore, co-creator with Robert Kirkman on the first six issues of the series, has filed suit against his onetime partner accusing him of promissory fraud, breach of written contract and other charges.

Moore claims that Kirkman persuaded him to assign his rights on Walking Dead and other properties to a limited liability corporation controlled by Kirkman, who allegedly hasn’t shared any royalty or other payments for Walking Dead or any of the other works.

Moore asserts that in September 2005 he and Kirkman entered into the agreement which assigned Moore 60% of comic publishing net proceeds for The Walking Dead and another title Brit, 20% of all motion picture net proceeds for Walking Dead and Brit and 50% of all motion picture net proceeds in connection with another title Battle Pope. Moore says in the suit he was reluctant to enter into the agreement. But he claims Kirkman informed him that if he didn’t assign his rights as specified it would kill the “large television deal on the table” and no one would receive any money. Kirkman allegedly promised to pay Moore royalties and provide regular, accurate accountings. Moore claims that Kirkman has never paid any royalties or provided an accounting of profit or loss.

Moore seeks damages in association with his purported share of any money Kirkman has already received plus his any share of any money outstanding. He’s asking for a court order for Kirkman to provide complete and timely accounting as well as payment of accrued interest and court costs. You can read the lawsuit here.

Let’s unpack this a bit:

1. If, as a comic creator, you ever felt screwed over by an Image Comics deal before, you now have yet another reason to feel so. If you ever considered bringing your comic to Image, you now have to wonder if you can trust the partners to give you a fair accounting.

2. If Moore is correct that no monies have been paid under the contract, then the entire contract can be declared null and void, which means that Moore would then have a claim on both the comic series and, more crucially, the television series– and since the TV series would then have been made without his permission, he can extract a tremendous amount of money from the production company.

And remember– just like zombies, it takes a lot to kill a lawsuit.