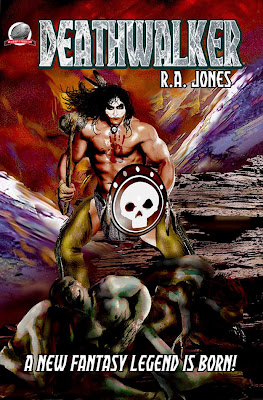 Airship 27 Productions announces the release a brand new fantasy novel by noted comic book writer, R.A. Jones; “Deathwalker.”  Jones is best remembered for his early work for Malibu Comics where he created the adult action series, “Scimitar” along with artist Rob Davis.  Now he turns his imagination to a different kind of hero, this one inspired by a certain Robert E. Howard barbarian.
While on his vision quest, the young Cheyenne brave High Bird encounters the spirit of Death.  The powerful wraith recruits the boy as his new agent in the world and High Bird returns to his tribe altered forever as Deathwalker.  When the Cheyenne become the target of a vengeful Pawnee Shaman, Stands Alone, only Deathwalker can stand between this evil sorcerer and the total destruction of his people.
Writer R.A. Jones has woven a new and exciting fantasy set against the background of authentic Native American lore and culture.  He dares to imagine what this wild untamed land would have become had there been no conquests by outside civilizations beyond the great waters.  Here is an old world re-envisioned in a bold new action packed adventure worthy of pulp writers such as Robert E. Howard and Edgar Rice Burroughs.  Featuring stunning cover art by Laura Givens with interior illustrations by Michael Neno.
Airship27 is proud to present R.A. Jones’ DEATHWALKER, another original and quality title in the New Pulp movement.
AIRSHIP 27 PRODUCTIONS – Pulp Fiction For A New Generation!
+++
Available at three sites on-line.
Airship 27 Hangar
(http://robmdavis.com/Airship27Hangar/airship27hangar.html)
From Amazon –
(http://www.amazon.com/Deathwalker-R-Jones/dp/0615597521/ref=sr_1_10?s=books&ie=UTF8&qid=1328910046&sr=1-10)
And Soon From –
(http://indyplanet.com/store/)
Share