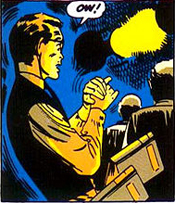 Well, this one is fun.

Where did it come from? And… where have we heard this story before?

According to the omnipresent “experts,” any living creature inside in the pools of “safety” water would have been exposed to the nuclear fuel and could have evolved into a new species. It turns out there is a bacterium that scientists call Deinococcus radiodurans (normal humans really don’t care – thus far) that is so resistant to radioactivity that it has been reengineered for use in the treatment of radioactive waste. So, I guess it’s possible that the spider that weaved a web, if it indeed is a web, could have survived to… oh, say, bite a wandering science student.

Which, as we all know, could give him the proportionate power of a spider. Then again, it’s probably more likely it would simply kill the poor bastard.

Or… then again… the whole thing simply could be a really nuanced promotion for the upcoming Spider-Man reboot.

Either way, you can’t be too careful and ComicMix recommends our South Carolina readers invest in some bug spray.