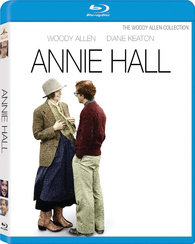 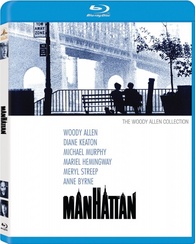 20th Century Home Entertainment continues to explore their library, releasing Blu-ray editions of popular and important films. Recently, two of Woody Allen’s best films were released and are worth a second look.

Allen as a comedian was a witty, smart writer and performer, coming from a literate line of humor that was in rapid decline by the 1960s. In some ways, he was the bridge between that era and today when men like Jon Stewart and Stephen Colbert carry the mantle. His early films were very funny and as a director, he was learning the ropes, figuring out what worked while entertaining the masses.

That culminated in Annie Hall, his 1977 serious comedy featuring his then-paramour Diane Keaton. The movie was a quantum leap in sophistication, partially from the smart script co-written with Marshall Brickman, but a most self-assured hand behind the camera. Allen shows a maturity as a filmmaker that proved to audiences and critics alike he was more than just a funny and funny-looking guy. The movie went on to earn four Academy Awards including Best Picture (besting Star Wars), Best Actress, Best Directing and Best Screenplay. 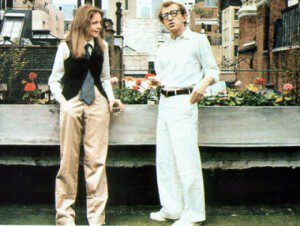 Yeah, there are a lot of visual touches and even some of the dialogue that smacks of the 1970s making it feel slightly dated today, but it’s nonetheless worth watching again. Keaton’s off-kilter performance was very much the actress infusing the character with elements of her personality and her eclectic fashion sense began trends that linger today.

Allen’s Alvy is a comedian falling for Annie, a dizzy nightclub singer but his neuroses drive her from his arms and across the country. He has to conquer those fears to follow his heart and her in the hopes of true love. Along the way, he skewers conventions and social trends of the day. The cast is interesting to explore since we’re seeing a variety of performers early in their careers including Christopher Walken and Sigourney Weaver while flavor of the moment Shelly Hack is also here.  And of course, Tony Roberts is on hand as he was for most of the films during this period of Allen’s career. 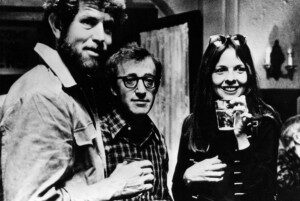 Also along for the ride is Gordon Willis, the cinematographer Allen called a vital teacher. Thus the film looks terrific and even better in high-definition. Also vital to the film were editors Ralph Rosenblum and Robert Karen, who trimmed the 2:20 rough cut into the 93 minute classic. As a result, an entire movie’s worth of scenes were sliced away, reducing the story to its timeless essence. This is also the film that features one of my all-time favorite gags as a moron pontificates on the meaning of Marshall McLuhan’s work, and Allen reaches behind a cardboard standee to produce the real McLuhan to correct the speaker. There’s also a fun animated sequence with art taken from the Inside Woody Allen comic strip.

Trust me, the transfer is terrific and is worth the upgrade. As is Allen’s wont, he desires his work to speak for itself and has eschewed any extras beyond the trailer. 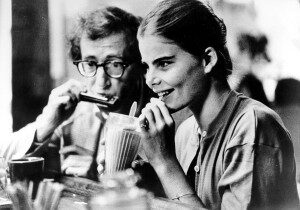 The maturation of Allen as a filmmaker is seen on display in the second film, Manhattan. This is his ode to the city and permanently cemented the Big Apple with Allen in the public’s imagination. It’s also the story of man, twice divorced, who embarks on a romantic relationship with a 17-year old. The ick factor is worse when you realize this preceded Allen’s own romance with the 21 year old stepdaughter of his girlfriend Mia Farrow. The 1979 movie is more than that and once more co-writing with Brickman, it features the city in its best possible light. Speaking of which, it’s in black and white with brilliant Willis cinematography. On Blu-ray the city has never looked lovelier. 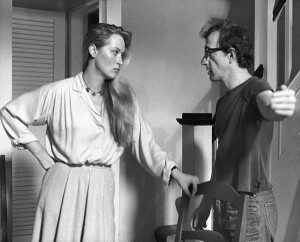 Allen’s Isaac Davis has given up writing for television to write a book about Manhattan and all around him, people are leading miserable lives, cheating on one another and discovering their homosexuality. We have Yale (Michael Murphy) the best friend cheating on his wife Emily (Anne Byrne) with Mary Wilkie (Keaton) while ex-wife Jill (Meryl Streep) has come out of the closet and taken up with Connie (Karen Ludwig). Then there’s Tracy (Mariel Hemingway) who is wrong for Isaac on many levels.

Once more, Allen is dealing with issues of society and social mores, with less humor than previous films and more introspection. It’s a wonderful blend of a solid script with a lavish visual sense, topped with a George Gershwin soundtrack that is romantic. This confirmed that the previous movie was not a fluke.

Singly, or together, these are Must See Woody Allen movies, even without the usual whiz bang extras. The works themselves more than command your attention.