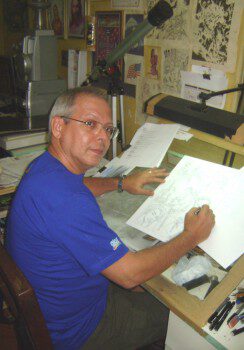 Bleeding Cool reports that Al Rio, best known for his work for Wildstorm, Marvel, and Zenescope, died this morning in an apparent suicide. He was 49.

Al Rio, born Alvaro Araújo Lourenço do Rio on 05/19/62, was raised in Fortaleza, in the northeast of Brazil. Al began his career in Rio de Janeiro, Brazil, as an artist in the early ’90s, illustrating books for a local English School.

After working as animation director at this same company, Al became an animator in Brazil for Disney, working on such properties as the syndicated Aladdin animated series.

Upon joining the comics-centric international art agency Glass House Graphics in the mid-’90s, Al began working for DC Comics, though his “big break” came from succeeding J. Scott Campbell on Wildstorm’s Gen 13. From there, Al, best known for his versatility and his ability of drawing some of the sexiest women in comics, went on to draw for Marvel, Vertigo Press, Dark Horse, Chaos! Comics, Avatar Press, Crossgen, Zenescope, Image, and more — drawing titles such as his own series Exposure, as well as Captain America, DV8, Voodoo, Purgatori, Lady Death, X-Men, New Mutants, Spider-Man, Vampirella, and Star Wars, among many others.

Al is survived by his wife Zilda and their three children, Rene, Adrielle, and Isabel.   His funeral will be held on Wednesday, February 1st, on Cemitério São João Batista, in Fortaleza, Brazil. Contributions may be made to his family on his behalf through Kickstarter, and condolences may be sent to his family through terry@alrioart.com.