Pro Se Productions, a leading Publisher in the New Pulp Movement, announced its latest release today!  A three story collection entitled ‘Tales of the Vagabond Bards’ written by Nancy Hansen is now available.   Hansen, a prolific author in Pulp Fantasy, follows up her first novel, “Fortune’s Pawn” with this trio of tales set in the same world as the novel, but looking at events through a different set of eyes.
According to Pro Se, “In a time of upheaval, where magick and religion often collide, those who keep the old ways are increasingly shunned and ridiculed. The Vagabond Bards, a dedicated group of musicians, singers, actors, poets, and teachers of the unwritten oral folklore of the Terran Worlds, are finding themselves coming under pressure to disband or face probable imprisonment—even death. For generations these roving men and women have spread throughout the population, dedicating their lives to educating and assisting their fellow Humans while recording and preserving their knowledge and experiences, making sure the tales of the past are kept alive throughout the mostly illiterate masses. Sworn to Understand, Love, and Keep the Truth, they now face strong opposition from the upstart religion of Helios the Sun God, whose belief is sweeping the countryside, rewriting history and changing views of the past in the most alarming manner. These are the tales of those heroic troubadours, who fight for justice not with weapons, but with words.” 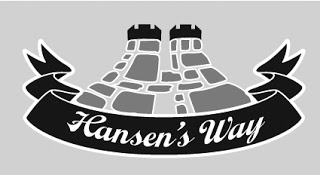 This exciting collection of fantasy fiction from one of New Pulp’s brightest stars in the genre not only debuts a whole new cast of characters and tales from Hansen, but is also the first volume in Pro Se’s latest author focused imprint-Hansen’s Way!
There are times when it is mindboggling,” commented Hansen concerning her work leading to her own imprint, “and I’m surprised I can keep the details straight. When I was approached about having my own imprint—which is an honor for someone who previous to 2010 was an unknown writer—I immediately thought about all those Terran World (the home of the Vagabond Bards) short stories, and bringing them in under one banner. I have 5 different series amongst those right now; each series with its own unique setting and recurring characters, and there have been some crossover characters and settings between them. It just makes more sense to keep them under one flagship imprint than scattering them hither and yon in other publications.”

“Nancy is a hit,” stated Tommy Hancock, Partner in and Editor in Chief of Pro Se, “both with the company and readers eager to follow her work.  “Fortune’s Pawn” had a great showing as a debut novel and Nancy has so many stories bubbling and ready to boil over, stories that appeal to all sorts of readers-Pulp fans, fantasy followers, and more!  And now they can all easily find her work by following ‘Hansen’s Way.’” 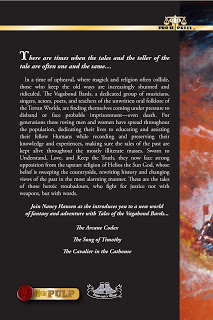 Hansen’s Way is the latest Pro Se imprint.  Following the announcement mid 2010 of Reese Unlimited, the first Pro Se imprint, Hansen’s Way is the second Author Focused Imprint from the publisher.  “When an author,” Hancock commented, “presents not only with a large, but a solid body of work, such as the imaginative worlds of fantasy whirling around in Nancy’s mind, it makes sense to put them in a package, in a sense.  Especially when the stories hit a vein with fans as Nancy’s obviously have.”
“Tales of the Vagabond Bards” is available via Amazon as well as via Pro Se Pulp’s CreateSpace store (https://www.createspace.com/3778916) in print and will be available via Smashwords and Amazon as an ebook within the next week!
For more information on this title or any Pro Se publication, email Hancock at proseproductions@earthlink.net and check out Pro Se at www.prosepulp.com!
Share