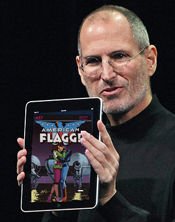 According to Pew Research, one out of every five adult Americans now owns a tablet or an e-book reader. That was before Apple announced its new e-textbook initiative.

Imagine buying all your college textbooks for about a hundred bucks and then carrying them around in a 1.33 pound device. You’ll never need your locker again. Students won’t pop their spines carrying a backpack that is so heavy PeTA wouldn’t let you strap one onto a mule.

And if you’re a comics fan, you’ll never need to schlep around a couple hundred long boxes. Well, not unless you want to.

So people should just stop bitching about electronic comic books. It’s not controversial any more. It doesn’t begat bootlegging; certainly not now that the government is shutting down bootleg sites. Just as soon as publishers start releasing their books at a fair price point – there are no printing costs, no paper costs, no shipping, no returns, and no alternate covers, so $2.99 (let alone $3.99) is a rip-off.

“But I like the feel of the paper,” you might whine. Yes, and I enjoy hearing the crack of the buggy-whip. Deal with it. Stop cutting down trees and milking our ever-dwindling oil supply to print and distribute all those books and magazines you read once – if at all. Publishing is an ecological nightmare; e-publishing doesn’t cure the problem but, like the hybrid and electronic engines, it helps. A lot.

The other by-product is even more interesting: we are breeding a new generation of readers. People are buying e-books and magazines and newspapers and we’re reading them on our iPads and Kindles and such. For a full year now, adult hardcovers and paperbacks, adult mass market books, and children’s/young adult hardcover and paperback have exceeded hard copy sales. In the past year, Borders finally bit the dust, Barnes and Nobles continues to cough up blood, and tablet/e-reader sales skyrocketed.

Tell me where our future lies.

If sales slow down considerably – forgetting how Apple’s sold zillions of iPads to schools and to businesses, forgetting how the iPad 3 is coming within the next 10 weeks, forgetting textbook sales – then it’ll take as long as, oh, maybe three years before over half of the population of American families have one.

Yes, you don’t have to use the device for reading. You can do a lot of other things with your tablet: play games, surf the Internet, write stuff, listen to music, watch teevee, even make phone calls via Skype. All I need is a comfy chair, a toilet, a shower stall, a refrigerator, a microwave and a great pair of headphones and I’m set for life.

Comics store owners – the smart ones – are beginning to adjust. They’re filling in the vacuum created by Borders’ vaporization by expanding their trade paperback and hardcover racks. They’re getting involved in more comics-related tchotchkes, more heroic fantasy movie stuff, and more innovative and distinctive product in general. They no longer have to endure as much terror as they go through the monthly Diamond catalog to guess which non-returnable pamphlets are going to put them out of business.

So, again I ask you – as comics readers, as book readers.

Where does our future lie?