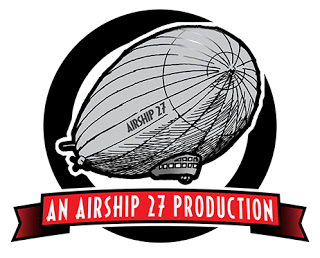 After months of hard work, Rob Davis, the Art Director has finished work on the new official Airship 27 Productions website.  Titled the Airship 27 Hangar, the site features two all important links.
The first brings visitors to the PDF store where all Airship 27 pulp titles are available for $3 dollars as PDF downloads for their PCs or various e-readers.
The second brings readers to the Airship 27 Print-On-Demand shop at Indy Planet.  Indy Planet is a division of Ka-Blam, one of the leading print-on-demand operations in the publishing world today.
“Now our fans can find all books with one click of their mouse button,” Airship 27 Managing Editor-in-Chief Ron Fortier announced.  “These new internet shops have allowed us to drop the prices of our product while maintaining the high standard of quality our readers have come to expect from Airship 27 Productions.  These steps insure our continued growth with dozens of great new titles now in the planning stages.”
“Expect our first title of 2012 to be released within the next week,” Fortier continued.  “Both Rob and me are very, very excited about the future of Airship 27 Productions.”
(http://robmdavis.com/Airship27Hangar/airship27hangar.html)
Share