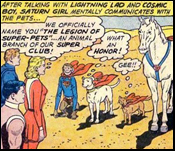 The most important story of the new year is not being covered by the lame-stream media. You won’t find it on the more popular blogs. Neither Heidi MacDonald  nor Rich Johnston has the scoop.

We’re getting a new cat. You heard it here first.

In my life, I’ve only had three cats, unless you count the two on the commune where I spent 1974 and half of 1975. My first cat, Toots, came from a friend who found her on the streets of Yellow Springs, Ohio, and brought her to me in college. The second two, sisters Trixie and Midnight, were brought over from a rescue group. This time, I went to the Humane Society. They asked me what I wanted.

Using all available self-control, I did not specify a lightning-bolt marking on the right side. Neither did I specify super-strength, x-ray vision, nor the ability to fly.

Is there a more appealing concept in all of literature than the super-pet? Superman had Krypto, a super-dog, Supergirl had Streaky, a super-cat, and Comet, a super-horse. Batman had Ace, the Bat-hound. Chameleon Boy had Proty, a malleable blob.

I wanted all of them. I also wanted Beppo, the super-monkey, although I was never clear on whose pet he was.

At the time I had a dog, because at the time, I was ten years old and lived with my parents and had a yard. My dog was fairly awesome, but she couldn’t do anything Kryptonian. She couldn’t change her shape. She couldn’t even solve crimes. It seemed to me that having a pet who could take me on adventures, who could perform extraordinary feats for my amusement and, if necessary, for my protection, was the greatest thing that could happen in a person’s life.

As I said, my dog didn’t do any of those things. She did, however, love me more than anyone else. She even loved me more than my mother, who fed her.

A companion animal – a pet – is wonderful for a child. A pet won’t blab her secrets, no matter how juicy. A pet, unlike parents and teachers and even school friends, never judges her. A pet is always there, to play in the backyard or to sit in her lap watching television. A pet is always warm and soft and there when she needs a hug. For all these reasons, a pet is also wonderful for adults.

Those are pretty awesome super-powers.

Because the Humane Society has a fairly rigorous process to match animals to humans, I don’t yet have my new cat. I don’t think we’ll be naming her Streaky, because, really, I’ve never seen a cat with markings like that. I’m thinking of naming her Selina, after Selina Kyle. And also after a fairly brilliant singer-songwriter.

And I reserve the right to make her a cape.