Pro Se Productions, known for its quality books and magazines since coming on the New Pulp scene in 2010, announced today that due to the company’s past success as well as ambitious plans for 2012 and beyond, new positions have been added to the Pro Se Productions staff roster.
“In order to,” Tommy Hancock, Partner and Editor in Chief of Pro Se stated, “not only continue to produce at the quality and level we have been, but to continually improve and exceed that, it has become necessary to spread the work around a bit.  Fortunately there are those who support and believe in Pro Se’s goal of providing the best possible New Pulp fiction it can that have agreed to fill these positions.   They are no strangers to the company and have proven themselves in various other capacities, mostly as writers.  In at least one instance, we are finally giving a title to someone who Pro Se would not be what it is today without.”
The new staffers and their positions are as follows, according to Hancock-

Director of Art and Design- Sean E. Ali.  Hancock said, “This is a position that Sean has had with me since long before Pro Se existed, along with several others like sounding board, critic, friend, and others.  Sean is one of the best designers in New Pulp today and proves that by upping his game with every single new work Pro Se puts out.”

EBook Format and Design Consultant-Russ Anderson.  According to Hancock, “Russ is a godsend in that this is a direction Pro Se has been aimed at for a while.  Now we’re able to pull the trigger and Russ is firing out our eBook versions at a good clip and great quality as well.” 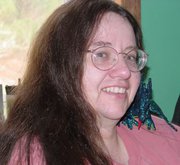 Assistant Editor-Nancy Hansen.  Hancock stated, “I can’t put into words what sort of support Nancy has been as well as the fact that she is one of the most prolific and consistent writers I know.  And there comes a time when the right person presents himself or herself to any EIC that he has to say ‘It’s time to share.’  It’s way past time that I finally took Nancy up on all her offers to help and could think of no one better to assist me.”

Copy Editor-Don Thomas.  As Hancock put it, “Pro Se looks to continually improve and editing is one area where every single publishing company in the world can always do better.  As a part of that we’ve brought on editors to handle specific duties.  Don has been with Pro Se since before our first magazine hit the stands and has a commitment not only to Pro Se, but also to New Pulp.  Handling spelling, grammar, and other basic copyediting is something he has already tackled with dedication and persistence. “

Magazine Editor in Chief -Lee Houston, Jr.  Hancock reported, “Again one of those who has been with Pro Se since our first call for writers, Lee is an amazing individual.  He tackles every project with excitement and passion and wants only the best from himself and Pro Se.   He definitely displayed a great work ethic as a writer and as a genre magazine editor and has already brought that level of ability and dedication to this new position.”  Houston oversees Thomas’ work on the magazine as well as Frank Schildiner, magazine editor.  “Frank,” Hancock added, “is a top hand and continues to prove an asset to Pro Se’s magazine line, especially now that we have streamlined it to one title.”

Pulp Poetry Editor-Megan Smith.   “This,” Hancock explains, “is a position that we created for two reasons.  One is we get more requests than you would think for poetry, both in book and magazine form.  One of the first queries we got was whether or not we published crime poetry.  We didn’t then, but now we want to.  The other reason is we have the person perfect to head up this potential new line already working with Pro Se.  Megan is an up and coming writer, known primarily for Perry Lell from Pro Se as well as giving her face and skills to The Pulptress, a spokesmodel for Pro Se and New Pulp.  Megan is also a fantastic poet and her real passion lies in working with others interested in that.”  More details will follow, according to Hancock, but there will be at least one magazine issue devoted exclusively to Pulp Poetry from Pro Se this year with Smith at the helm.
Other staff members already working with Pro Se include Hancock (Partner and Editor in Chief), Fuller Bumpers (Partner and Chief Executive Officer), and Barry Reese (Submissions Editor).
“These additions,” Hancock noted, “are not simply to look like we’re bigger than we are.  Pro Se has literally grown tremendously in the last year and these positions have become necessary.   We are also considering other positions as well, related primarily to marketing and promotions, but that’s an ongoing process.”
To follow or get more information on Pro Se, check out www.prosepulp.com and www.pulpmachine.blogspot.com.
Share