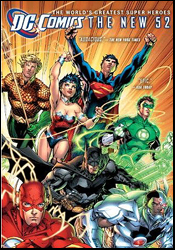 Most people in the industry know that my best friend is Denys Cowan.

Denys is one of the greatest comic book artists that the business has ever seen. He’s the artist a lot of other artists look at and as to underscore that fact he’s been nominated for not one but two Eisner awards for best penciler.

He has worked for every major publisher out there. He’s one of the few artists that commands respect from both Marvel and DC without pissing one or both off.

There’s not a major publisher out there that would not consider it an honor to have a Denys Cowan project under their imprint.

Denys is really hard to impress when it comes to comics.

Both Denys and I both think the new DC 52 are just wonderful comics.

I’ve got a less than stellar history with DC comics. That said, they are and have always been my favorite comic book universe since I was a kid.

It’s not just nostalgia I’m thinking about. I feel that way because I think DC comics has done some great creative stuff in the last 20 plus years. The second silver age was 90% DC in my opinion.

Denys looks at comics from a much more artistic point than I do, but we are both fans of the New 52.