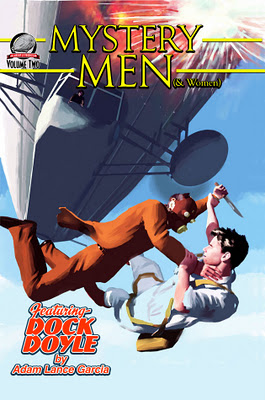 New Pulp is such an interesting creature.  It is organic, something sprouting from the past, but as it grows and blossoms, it becomes its own thing.   And there are Publishers and Writers today who continue to care for this beautiful thing we call New Pulp, making sure that it remains available, that it stands out as innovative and different, not derivative and unoriginal.    A leading Publisher in doing just that is Airship 27 Productions, a company that divides itself between New Pulp based on Public Domain pulp characters as well as new and original characters blazing trails through New Pulp.
One of the titles that showcases the movement of original characters in Airship is their MYSTERY MEN (& WOMEN) series of books.  Four stories in the first volume introduced the idea and it has been continued in a second volume.  Overall, the book is enjoyable, a hoot to read, and wonderful to view.   Individually, the stories vary in style and quality.
THE RED BADGE ATTACKS- by Mark Halegua and Andrew Salmon
This is not only the debut of the vigilante known as The Red Badge, but it’s also the first story published by the Badge’s creator, Mark Halegua.   The premise is simple.  A vigilante is in the city taking out the bad guys as quickly and violently as possible. Throw into that the fact that the identity of the Badge is a mystery, even up until the very end, but a mystery with a myriad of suspects.
The Red Badge has definite potential as a concept.  The path traveled by this story is well worn, but its also one that could be done with twists and turns.  Unfortunately, that’s not done nearly enough with this tale.  Yes, some of the action scenes sing like a chorus of tommy guns, but others drag like they’re falling on dead chambers.  The same with the dialogue-There’s a few solid exchanges, but overall it’s stilted and weak.   The strongest point of this story is you can see what Halegua (with help from Salmon) wants the Red Badge to be, which gives one hope he may get there in future tales.
TWO OUT OF FIVE TIPS OF THE HAT
LAIR OF THE MOLE PEOPLE- by Greg Bastianelli
One of the neatest stories in Pulp is when you take a person in an occupation that isn’t cop, adventurer, spy, and you throw them into a Pulp over the top adventure tale and it works!   Bastianelli does this with his character Jack Minch, Ace Reporter in this tale and does it so well and with such skill that the story was over before I even realized it.    The premise, again like with the previous story, is straightforward.  Minch opens a message from a woman who had left it behind to be opened if she disappeared, which she did.  This action leads this spunky, two fisted typewriter jockey into a world beneath the city, as indicated by the title, and at that point, the real fun begins.
This story crackles with solid characterization, strong dialogue, and enough jump-from-around the corner action to keep any Pulp fan enticed and most definitely wanting more!
FIVE OUT OF FIVE TIPS OF THE HAT 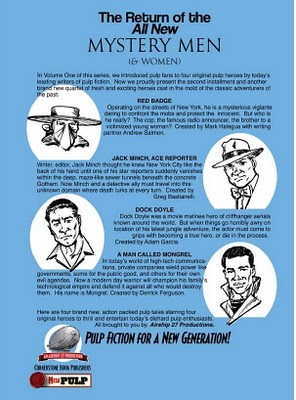 DOCK DOYLE AND THE WANDERING CITY by Adam Lance Garcia
This story gave me fits.  Here’s why.
Dock Doyle is a great American Hero and Movie Star, legends galore attached to his name.  And this story takes him on an adventure deep into the Jungle for what is apparently another film job, but Doyle finds out far too late that things are not at all what they seem.  And the reader finds that out as well, even about the central character himself.
This is quite possibly one of the best stories I have ever read.  No kidding.    Looking at it as an avid bibliophile who reads across all genres and recognizes all the movements, nuances, and influences in literature, mainstream and otherwise, this story is one of the best examples of post modern deconstruction I have found in a long time.
Looking at it as a reviewer of Pulp….It isn’t.  It simply isn’t a Pulp Tale.
Don’t get me wrong.  Some key elements are woven in.  Action.  Quick Pacing.  Exotic locales.  Defiance of death.  All of that is there.  Where this fails as a Pulp story is in the characters, especially the lead himself. Garcia paints vivid pictures and builds characters from the ground up.  But they’re not Pulp characters.  And trust me, I don’t feel Pulp characters have to be two dimensional or all good or all bad….but with Dock Doyle, there’s far too much gray even in the lead character…especially in the lead character…for this to be a Pulp Tale.
THREE OUT OF FIVE TIPS OF THE HAT- It ain’t Pulp, but it is damned good.
A MAN CALLED MONGREL by Derrick Ferguson
One of the great things about a good author…no, about a great author, is that he/she can deliver consistently, even when they are writing characters with some similarities in the same field of literature.  And not just consistently in terms of quality, but also consistently in terms of differentiation-in making their work stand out solidly from what has come before.
Derrick Ferguson is just such an author.  A master of the art.
Mongrel is a member of a family who essentially has a corner on the genius gene pool.   When an attempt is made on the life of a family member, Mongrel swings into action against a Family that is focused on taking down leading corporations in the world via super science.   But not while Mongrel Henderson is on the job.

This tale is raucous, over the top, and yet grounded in strong values.  Family connections, pure heroism, and the battle of intellect versus emotion are all not only clearly on display in this story, but turned up to Eleven and broadcast in every single word.  These characters, particularly Mongrel, exude excitement, action, as well as humanity.    Mongrel can take on nearly any baddie that wants to stand with him, but he still cowers when called down by his mother.  Ferguson’s strong suit in all his work is that the action is relentless, the violence is pointed and necessary, and the characters ooze the good and bad of simply being human, although the smartest, toughest, and most righteous or vile humans ever seen anywhere.  This story stands out as the best in the entire volume and likely in the entire MYSTERY MEN (& WOMEN) series to date.
FIVE OUT OF FIVE TIPS OF THE HAT
Design and Art-Even though I said what I did about Dock Doyle’s debut story, the first image of Dock to be seen, the cover of this volume, is phenomenal.    Award winning artist Mike Fyles delivers once again and proves he understands the concept of what Pulp covers are and what they need to convey.
Likewise the interior art and design of the book by Rob Davis does just what both of those things are supposed to.   Davis’ work supports all the stories, the images bringing out in wonderful line work and iconic imagery exact moments from the stories and the format of the book makes one feel as if they’re holding a Pulp from a news kiosk back in the Thirties.    Even the back cover design as well as the ads included add to that authentic feel.
FIVE OUT FIVE TIPS OF THE HAT

Even though every story wasn’t a grand slam and one might be better suited in another volume, MYSTERY MEN (& WOMEN) VOLUME TWO as a whole delivers.
OVERALL-FOUR OUT OF FIVE TIPS OF THE HAT!
Share