Before I get to the box that came today, I have to thank Glenn Hauman, who was responsible for several big boxes of stuff that showed up semi-mysteriously yesterday, while I was at work. He was trying to get me started on rebuilding the collection that the flood destroyed, and it was one of the nicest things that anyone has ever done for me. (I haven’t really had a chance to see what’s there yet — I’ll probably have to wait until I have shelves again, and unload directly onto them to go through it all.) I’m not sure where all of it came from, so thanks to Glenn, and thanks to anyone else who was responsible.

But today a box came in from Midtown Comics, which used to be my local when I worked in the city, and which has been e-mailing me about their deals incessantly in recent weeks. Just before Thanksgiving, they had a sale that finally got me:

How could I resist? And so here’s what I got:

by Michael Kupperman — I’m not sure if I’ve read all the way through anything Kupperman’s done, but this odd item — a heavily-illustrated comic novel, I suppose, rather than a graphic story — looked just quirky enough that I couldn’t pass it up.

edited by Alison Bechdel — I’ve been reading this series since it started (and I used to have all of them, boo hoo flood), and I keep hoping it will lead me to new creators that I haven’t already heard of. That hasn’t happened yet, but maybe this year will be the trick — and, even if not, it’s always a book filled with interesting stories and pieces of stories. 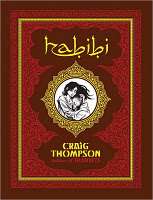 by Craig Thomson — the creator of Blankets

is back with another gigantic book, this time a less realistic story that’s raised accusations of sexism and Orientalism. If you can’t piss off someone, what goo is making art at all?

by Paul Hornschemeier — Eventually, I’ll be able to spell his name without looking it up, and his work is honestly worth that effort. (Though I don’t remember reading anything substantial of his beyond Mother, Come Home

.) I honestly have no idea what this graphic novel is about; I just know it’s the new Hornschemeier.

edited by some minor, probably uncredited Marvel functionary — The second clump of stories by “independent” comics creators featuring the long-underwear characters created by Stan, Jack, and their ilk. I liked the first one, though it was pretty tame, compared to what it could have been.

by Jason and Vehlman — It’s the new Jason book for this year, with pirates and the usual cast of deadpan folks with animal heads. I dunno who Vehlman is, but he’s the co-writer.

by Evan Dorkin — I am, sadly, exactly the right age to be a big Dorkin fan, and I am one. I’m not sure if this reprints all of the old M&C stuff (previously in two? — I think — slim trade paperbacks from SLG, the company that wants you to forget they ever used the term “Slave Labor”), but I hope so, since that’s yet another thing I need to re-buy.

And last is Dan Clowes’s The Death-Ray

, another repackaging of what once was a single issue of Eightballas a standalone graphic novel.  I believe there is something superhero-y about this one, but I originally read it so long ago (when the issue came out) that I hesitate to say more.