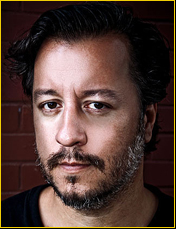 A few weeks ago I was blathering about the absence of new superheroes in the current television schedules. Shame on me! I forgot about Super Ray.

Before you rush off to consult TV Guide searching for time and channel, be assured that you won’t find Ray there. The show he’s on isn’t about him. Fact is, he’s not exactly on the show. He’s a character created by one of the fictional people who is on the show. This character, also named Ray, is a comic book artist and Super Ray is his brainchild.

Still with me? Good, because it gets even more complicated.

The show is called Bored to Death and it concerns Jonathan Ames, a largely unpublished writer who moonlights as a private eye, his editor/restaurateur mentor George, and his cartoonist pal Ray. It’s a comedy, one which has grown on me; initially, my reaction was take-it-or-leave-it, but that’s morphed into a genuine fondness for an entertainment that’s quirky, unique and… what am I forgetting?… oh yeah, often quite funny.

Bored to Death gleefully and wantonly blurs the line between fiction and real life. The nominal hero, Jonathan Ames, played by Jason Schwartzman, is – no surprise here – based on the real Jonathan Ames but…the actual Ames plays Irwin who is trying to stab Ray because of a problem involving a woman. George Christopher is played by Ted Danson and I’ve never liked him in any role as much as I like him as George.

Which brings us to Ray, played by the ubiquitous Zach Galifianakis, and also inspired by a person with an address and a social security number, Dean Haspiel. Like the quasi-fictitious Ray, Dean is a cartoonist and a friend and colleague of Mr. Ames. All clear, right? Ray is tight with the Schwartzman/Ames and Dean is tight with the Ames/Ames.

Wait – there’s more! Some of Bored to Death’s storylines are borrowed from Dean’s autobiography.

But here the correspondences begin to dissolve. You probably wouldn’t mistake Haspiel for Galifianakis. Zach/Ray is a pretty dour dude whereas Dean is cheery and ebullient. To me, Dean seems to be absolutely delighted to be who and what and where he is.

(Yeah, you got me. I do know Dean – have known him since he was a little kid. He’s one of my son’s oldest friends. Okay with me if it’s okay with him.)

One more thing: Dean Haspiel is the only person I know who possesses an Emmy, an award he received for work on Bored to Death’s animated title sequence. And when Zach/Ray draws a picture on television, Dean actually wields the pencil…and again, the lines blur.

But see for yourself. Bored to Death. HBO. Monday nights at nine, eastern time.

RECOMMENDED READING: Nothing in particular, but Dean Haspiel’s website has information about his published work and a little Googling would probably yield more Dean, as well as a list if Jonathan Ames’s books. (The real Jonathan Ames, that is.)