MINDY NEWELL: To Love, Honor, And Cherish Until Death – Or Editorial Decision – Do Us Part 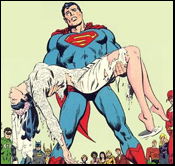 If you’re a regular reader of this column, you know that my daughter, Alixandra Gould – yes, she’s keeping her name – married the love of her life, Jeffrey Christopher Gonzalez, last week. (A big thank you! to Mike Gold for posting a beautiful column last week that I posted on Facebook, then e-mailed to every single person I’ve ever met just to make sure they read it, and which Alix and Jeff thought was terrifically cool.) So of course I decided to write about superhero marriages this week. Not a big leap, is it?

How did they miss Reed Richards and Sue Storm Richards, a.k.a. Mr. Fantastic and The Invisible Woman? Im-not-so-ho, Reed and Sue are the most realistically portrayed marriage “pros” in the comics universe.

The couple married in 1965, making this year the 46th anniversary of their being a Mr. and Mrs. (They look pretty damn remarkable, don’t they? Must be all those visits to the Negative Zone.) Down through the years, Reed and Sue “have and held, for better or for worse, for richer, for poorer, in sickness and in health,” and have loved and cherished each other through everything the Marvel Universe could and continues to throw at them, including “real life” curves like a miscarriage, potential affairs, political differences, and a brother’s death.

Peter Parker and Mary Jane Watson came pretty close in matching the Richards’ record – not in years married, but in a realistic view of marriage – but then Marvel decided to “disappear” their relationship. Clark Kent and Lois Lane had a wonderful thing going, too, but DC recently terminated without prejudice that couple, too.

And what the hell happened to Scott and Jean?

Jean Loring, the wife of Ray Palmer (The Atom) has a “mental breakdown” and goes on a rampage, killing Sue Dibny, the wife of the Elongated Man (Ralph Dibny), in one of the most gruesome scenes I’ve ever seen in any comic.

Betty Banner, wife of Bruce Banner (The Hulk) was abused, suffered miscarriages, was turned into a harpy, and died. She got better and turned red.