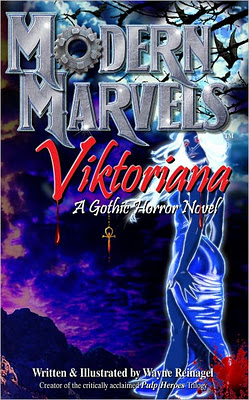 Several years ago, writer Wayne Reinagle burst upon the pulp fiction world with a self published tome that was the pulp equivalent of “Gone With the Wind.”  PULP HEROES – MORE THAN MORTAL was a giant white elephant of a clunker that was not well written and appeared to be stitched together by a fan boy who was irrevocably addicted to the classic pulp heroes of the 1930s & 40s.  Still, as badly exceuted as that book was, the poor mechanics could not disguise the genuine love and enthusiasm Reinagel possessed for these iconic heroes and how much fun he had playing with them.  You see, the audacity of the man is he put practically every single major ( & minor ) pulp hero in that one giant volume.  Here were Doc Savage, the Shadow, the Spider, the Avenger etc.etc., albeit all with new names to avoid legal repercussions from the rights holders, though readers knew exactly who each was.  Despite its literary flaws, the book is also important in that it was the beginning of Reinagel’s super saga that would invariably use every major literary hero and villain from both the 19th and 20th Centuries spread across an historical roadmap of herculean breath and girth.
Somewhere in all this Reinagel came to an unexplainable decision in regards to his pulp magnus opus; he’d inadvertently begun it in the middle.  After the subsequent release of MORE THAN MORTALS, he was plagued with plot threads that could only be rationalized by going backwards in time, rather than forward.  Thus the second book in the trilogy was actually the first chronologically: PULP HEROES – KHAN DYNASTY. It went back decades to give us the origins of the people who would ultimately sire the pulp heroes of the Great Depression.  Asserting his genuine talent, Reinagel’s prose is much improved with this book though it still suffered the same affliction as its predecessor; massive dumps of historical data were dropped helter skelter through the narrative even in the middle of some balls-out action sequences.  Again, Reinagel is not a man of moderations, he wants to give his readers ( & himself ) more and more.  Some times to the detriment of his tale.  Still KHAN DYNASTY was a major improvement and contained the portent of better things to come.
This reviewer is very happy to declare that literary promise has at long last been realized in Reinagel’s third book, MODERN MARVELS – VIKTORIANA.  Clocking in at an impressive 440 pages, it adds proof that the guy simply cannot write a short piece but it also loudly proclaims his arrival as a sophisticated storyteller.  This is the work of a craftsman who judiciously balances both action and characterizations and even though there are still many researched historical facts, they are kept concise and only used when propelling the action forward.  That this is the writer’s fastest paced, most colorful and grandiose book is blatantly obvious from the first page to last.
Once again, the author propels us backward to lay the foundation of heroic fiction in a brilliant twist that is pure nectar of the gods to any reader who grew up enjoying the fantastic literature of the 19th Century.  The heroes of this volume are the writers who produced those amazing works all of us encountered along the road to maturity and adulthood; the English classics with a few mongrel relatives thrown in for good measure.
The plot is simple enough.  The planet’s are about to align in a unique positioning only witnessed every thousand years and two insidious fiends, Varney the Vampire and his stooge, a teenage Aleister Crowley, plan to use the stellar phenomenon to their own twisted ends.  They wish to open a hole to another dimension; one filled with demons eager to crossover and destroy the earth.  But to do so, Varney requires nine special magical tablets or else his insane plot will fail.
Guarding those arcane items are the most famous and courageous souls of their times; H.R. Haggard, Arthur Conan Doyle, Jules Verne, H.G. Wells, Bram Stoker, Nikola Tesla, and an aged Edgar Allen Poe accompanied by a teenage magician named Harry Houdini. They are led by an enigmatic, seemingly immortal beauty, Mary Shelly.   Now if that isn’t a Who’s Who list of the most influential writers in English Literature during the late 19th Century, then I’d be at a loss to compile another.  The exuberant bravado of Reinagel is his fearlessness in employing this stellar cast and bringing them to wonderful life in his glorious adventure.  Their interaction amongst themselves, the romance between Haggard and the ever dangerous lovely Miss Shelley, the good-old-boys camaraderie between Doyle and Stoker is simply endearing and believable.
Wayne Reinagel clearly possesses one of the grandest imaginations ever unleashed on the printed page. His dreams and his fiction know no bounds when after adventure of the highest order and he delivers it beyond measure in this book.  Every one of his books is an experience with so many surprises in store for the reader but none have so entertained and delighted this reviewer as MODERN MARVELS VIKTORIANA.  Mark my words, pulp fans, your lives will be enriched for the better after reading this pure pulp odyssey by a truly one of a kind maser storyteller.  Bravo, Wayne Reinagel, bravo!
Share