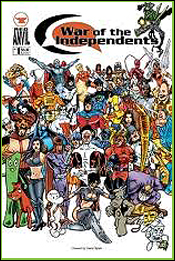 I was going to write an article about The Boys this week. I like The Boys. It’s violent. It’s intriguing. It’s full of rich character moments, surprising plot twists, and gritty and emotionally charged artwork. It’s also very close to finishing. So, I digress. I’ll cover it after it’s over. Spoiler alert. I love the series.

So, there I was, looking over the rack a couple weeks back. See, I was a little light that week on books in hand. I gave myself an excuse to nab one more book before I checked out. And there it was at the tail end of the indie racks… War of the Independents. Why not? The cover boasts a bevy of characters from just about every nameable indie cape book you can think of. Bone. Cerebus. The Tick. Scud: The Disposable Assassin. Cassy Hack. Captain Action. Hell, even the Flaming Carrot and Gumby are on the cover. Based on that, and a name that boasts a potential war with them all? There’s no way that could not be awesome, right? It’s like communism. It works on paper. But this here rag, written and occasionally drawn by Dave Ryan, doesn’t work. In fact, if this comic were a person, it would be the drum-beating hippie downing free pints of Ben and Jerry’s at Occupy: Branson.

Disclaimer: I like the Occupy movement in theory. But standing around demanding change isn’t exactly what I’d do to change the world. But I digress.

War of the Independents should be amazing. Getting the permission to work with scads of semi-known characters in a crisis-like setting just makes my mouth water. Who here amongst you would not want to see The Tick and Scud fight alongside Too-Much-Coffee-Man and Milk and Cheese? And then you open the book. Dave Ryan, utilizing every cliché known to comics, pens a tale we’ve already read a million times over… and fails to do anything original with it.

An age-old evil is going across the multiverse killing things. It’s up to a ragtag group of no-names to assemble and save us all. When Captain Action and Madman are on the same page, it’s not the time for prophecies and posturing. When Toyboy and Pokey share page space, it’s not enough to simply have them say “I’ll fight!” and call it a day.

The issue wastes six or seven pages filling us in on a villain as bland as mayo on white. Then Cerebus shows up with a team of people I’ve never heard or seen to fight a muscular super demon… for seven more pages. That’s a little shy of half the book wasted on the kind of crap we’ve read and reread! The other half of the book is just the putting together of the team. You’ve seen this all before. Ryan just hands the reigns over to various authors to pen a panel or two featuring their own creations. And before you know it, the book is over.

Next issue? It’s the all black-hero spectacular. Michael Davis should fire up the death ray. It’s simply not enough to get permission from this pantheon of partial fame, and just plop their character into a panel or two, and hope showing them will be enough. Any fans of the parent books from whence these people came from are hoping to see more than just a silent panel. Comic characters are more than just pretty drawings. War of the Independents thinks it’s simply enough to have them assembled. It’s not.

What I was truly hoping from this book was what the cover itself promised. Page after page of crazy Pérez-packed panels with wave after wave of indie heroes knocking heads with wave after wave of… something. Anything. Zombies. Other villains. Each other. Kids. Puppies. But we never get that far. 31 pages of content yield nothing more than a single fight scene (starring nary a single recognizable hero) and page after page of singularly unimpressive moments. War of the Independents? My Jewish Ass. I’m a firm believer of under-promising and over-delivering. This book should have been called 1 Great Double Page Splash, and Then Some Nonsense. (And the Tick Yells SPOON!)

It’s not a secret that I’m an indie comic creator. Given permission to assemble even a quarter of these creations, I would do more than simply waste time showing them join together. The fun of this idea is all in the fighting. If you’ve got The Badger, The Opossum, and the Unbelievable Laundry Detergent Man coming together, forget the subtext. And for the love of God, spend some time honing the art. No offense (because I know how hard it is to make a comic), but Dave Ryan’s panels are just terrible looking. Front to back, page after page… this was a waste of paper, talent, resources, and my money. And nothing gets my ire up more than wasting my money. To steal a contrived writers trick Dave Ryan likes to use… here’s a nice quote to make me sound fancy:

It is well that war is so terrible. We should grow too fond of it.