DAMBALLA!
A Review of Airship 27’s Damballa
by Andrew Salmon 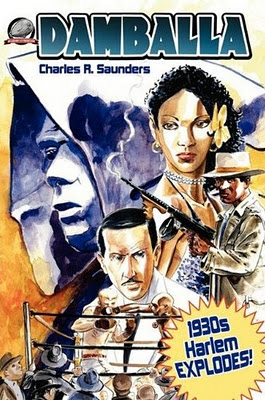 We’ve all been thrilled and enthralled by Classic Pulp. It has influenced so much of pop culture today. However for all its ability to be of its time yet ahead of its time, there is one black mark in the history of the form – racism. Now I am of the camp that believes it is not fair to judge the work of decades past with modern sensibilities. The great pulp yarns of yesteryear were products of their time, written for their time and should be read as such regardless of their faults however offensive they may be.
The New Pulp movement, however, allows us to revisit those bygone days and tell adventurous stories based in the past yet geared for the modern reader. And, more importantly, affords us the opportunity to correct the mistakes of pulp’s forefathers.
Enter: Damballa!
All of the wondrous trappings of pulp are here in this incredible work: action, adventure, evil scheming Nazis and a hero determined to foil their plot to embarrass the United States, politically, in the boxing ring – the key component here is that Damballa is a black man.
Given the classic pulp elements present in the novel, it would have been easy for Saunders to just trot out a pulp archetype and just changed the color of hero’s skin but an author of his skill and ability would not be limited to taking the easy way out. Instead Damballa has deep, African roots and an intriguing origin and supporting cast, the surface of which has only been scratched by this first adventure.
Some of you may be thinking, ‘Okay, Damballa makes history as the first black pulp hero, so what? I read pulp to be entertained. Is the book any good?’ All right let’s get down to brass tacks and tackle some questions:
What is the book about? Is it pulp?
Let’s tackle that first one, shall we? Set in 1938, Damballa gives us a fictional retelling of the real boxing re-match between Joe Louis and Max Schmelling. The real life bout had both political and racial ramifications as the German, Schmelling, went toe to toe with African-American Louis at a time when the world was on the cusp of WW2 and the Nazis were keen on proving their racial superiority. In the novel, the fighters are Jackhammer Jackson and Wolf Krieger but the stakes are the same. Thing is, the Nazis are cheating as only they can and it’s up to Damballa to level the playing field before disaster strikes. What follows is an engaging action yarn peopled with characters of every shade of gray. One of the wonderful, telling, modern touches Saunders brings to the pulp form can be found in one scene where Damballa, no slouch in the disguise department, has to masquerade as a white man to enter certain parts of 1930s society unmolested in his quest to stop the Nazis before it’s too late.
Yeah, but is it pulp?
Damballa is a pulp novel and a very, very good one. Punctuated by short, staccato chapters, Saunders keeps the story moving while layering in wonderful historical details that recreate the time period to perfection. Within this framework he inserts memorable characters, crackling dialogue, mysteries and a compelling hero for the ages. By arming Damballa with a wealth of African lore and real science to go along with brains, brawn and physical ability, Saunders introduces us to a costumed hero bad guys do NOT want to mess with. And one adventure fans won’t be able to get enough of. The book features an atmospheric cover by Charles Fetherolf and moody interior illustrations by Clayton Hinkle – the end result is one of the best looking, best reading pulp books of the year.
Damballa is one of the shining lights in the New Pulp movement, a truly exceptional novel you cannot afford to miss.
Share