ROBO POWER
A Review of Red 5 Comics’ Atomic Robo and the Deadly Art of Science
by Andrew Salmon
“THIS ONE HAS GOT IT ALL!!” 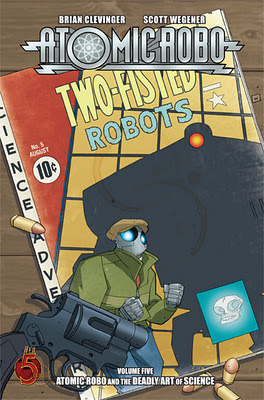 Okay, we’ve all heard that before and, let’s face it, 99% of the time it turns out to be utterly false. But, oh, when a work falls into that precious, lofty, rare 1%, then you know you’ve found something truly special. One for the ages.
ATOMIC ROBO AND THE DEADLY ART OF SCIENCE belongs in that 1%!
Remember when comics were fun? That’s another one we hear a lot and I’m not knocking the good stuff being produced today. Grim and gritty is the way and when done well, it can truly entertain. The problem is that whenever someone makes a splash doing comics a certain way, everyone else follows suit and every comic you pick up begins to read and look the same. That can be a good thing if the quality of the work is on the page.
However too much of anything is not so good a thing and every now and then this reader likes to sit down and just get caught up in a story, be swept away in a yarn that has captivating characters, tons of action, laugh out loud humor and, because we’re talking comics, wondrous images.
This latest Atomic Robo collection is, in a word, fun. By that I’m don’t mean to say that it is merely light-hearted fluff but I am saying you won’t feel like you need a shower after reading it. This collection of the Deadly Art of Science arc contains the elements mentioned above. It does, in fact, have it all!
Also, unlike the previous four Robo collections, this one is pure pulp! Writer Brian Clevinger, artist Scott Wegener and crew have crafted a fantastic two-fisted wild ride set smack dab in the 1930s. And it is a hoot!
It’s about time we got to enjoy Atomic Robo’s origin as well. For those of you who don’t know Robo, he is the creation of Nikola Tesla and his time-spanning adventures have chronicled in the four previous collections – all of which I give my highest recommendation. If you want a preview of what his other adventures are like, the Free Comic Book Day Robo adventure, set in the present day, is included in the collection as a back-up feature and it’s indicative of what you’ve been missing if you’ve never gone adventuring with Robo before. But let’s focus on the Deadly Art of Science.
When we first encounter Robo, he is living with his creator in New York City, the year is 1930.  Robo is bored, seeking adventure – as any young robot would – but he is cooped up with his reclusive creator and can only dream of action and adventure until a run-in with pulp hero extraordinaire Jack Tarot opens the door for Robo’s adventurous life to come. Tarot is chasing down a gang bent on getting their grubby mitts on a crystal skull from Atlantis. I won’t tell you who is backing them!
Robo, finally getting this first taste of adventure, latches on to Tarot for the duration and the exchanges between the “gritty” vigilante and the wide-eyed Robo – especially when Tarot’s ace mechanic daughter takes a shine to Tesla’s creation – will have you on the floor laughing. But this beautifully crafted humor won’t take you out of the action.
Bungling, but eager, Robo tags along as Tarot and his daughter investigate the gang and Robo has to be careful Tesla doesn’t find out his creation has been sneaking out of the house… What’s that you say? A rollicking robot coming of age pulp adventure tale with gangsters, first love, humor, adventure, a giant robot with a bowler and action galore… Well, didn’t I tell you Atomic Robo belongs in that precious 1%? You’ll be on the edge of your seat, you’ll cheer, you’ll laugh your head off and you might even find a lump in your throat along the way. It really doesn’t get any better than this.
Atomic Robo and the Deadly Art of Science is one of the best pulp releases this year, certainly the best pulp comic release of 2011. Period. I defy you to put it down once you’ve begun. I know I couldn’t. This one, folks, is an absolute gem.
Share