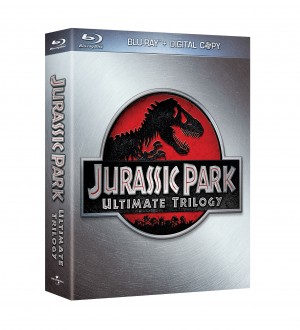 The advent of CGI allowed anything to become a reality if you could afford it. The promise seen in Terminator 2 quickly led the big budget producers to play with the new technology and the 1990s saw a shift in storytelling as these extravaganzas grew larger. When Steven Spielberg announced he was adapting Michael Crichton’s Jurassic Park for the screen, we knew this was going to be the pinnacle of an era. From the lush and note-perfect John Williams score to the familiar and welcome cast, we were in for a treat. That first establishing shot of the park and its legendary inhabitants was a jaw-dropping moment in cinema. Done right, the CGI didn’t overwhelm, but fit seamlessly to convincingly tell a story.

Unfortunately, as CGI technology became widespread and cheaper, it got used and misused with abandon. Similarly, the wild box office success of the first Jurassic film prompted Universal Studios to go ahead with a second and third installment when really all you needed was the first with a satisfying beginning, middle and conclusion. Still, kids love dinosaurs and the movies did well enough that even today talk of a fourth film surfaces now and then.

In time for the holidays Universal Home Entertainment has collected the trilogy, spiffed them up a bit and collected them as the [[[Jurassic Park Ultimate Trilogy]]], a three-disc Blu-ray box set in a handsome case.

The first film still holds up to rewatching (and this is one of Williams’ bets scores) thanks to a good story, strong script, fine cast anchored by Sam Neill (thanks, Jeff! –ed.) and Laura Dern, and creature models from the late, great Stan Winston. There was enough plausible science in Crichton’s novel to convince audiences that dinosaur DNA could be used to recreate the sizeable denizens of an earlier age and be put on display for paying customers at a park realized by Richard Attenborough. When things go wrong, coupled with corporate espionage (thank you Wayne Knight), a handful of people are stranded on the island and have to survive when dinosaurs go wild. This film was PG-13 and was a hard PG-13 given the thrills that arrived much like the amusement park the story emulated. By the time the summer of 1993 ended, the Velociraptor challenged the T-Rex for the most dangerous creature in children’s imaginations.

The Lost World: Jurassic Park had to overcome the fact that we’ve seen the dinosaurs and can’t be as surprised or enchanted this time around. But, if Crichton thought there was a second story to tell, who was Spielberg to question him? This time, the story, set a few years later, was about InGen’s corporate malfeasance and keeping the park a secret from an unsuspecting world.  Add a big game hunter (Pete Postlethwaite) to the mix and stir. This lacked the same impact and felt like a standard sequel, with more than a few notions stolen from King Kong. Goldblum and company return with a rare turn by Julianne Moore as an action heroine. 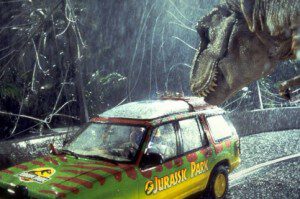 A new decade began feeling like the last one as Universal dipped one time too many into this past with Jurassic Park III, a creative and commercial misfire. Directed by Joe Johnston (Captain America), the story revisits story points from the first two films and the weak script offers up absolutely nothing new. And while it was welcome to see Sam Neill and Laura Dern in smaller roles to connect the trilogy, the heavy left gets done by a cast that includes William H. Macy, Téa Leoni, and Trevor Morgan. There’s really nothing to compel you to see this unless you just can’t get enough of cool CGI dinosaurs.

All three films look fabulous on Blu-ray, making the CGI work in the first all that more impressive. Industrial Light & Magic’s computer wizardry is still masterful. The sound work is also solid, which makes me fall in love with that Williams score all over again.

Every extra from previous releases is stuffed onto all three discs so this truly is an ultimate collection. Brand new to the box set is a multi-part “Return to Jurassic Park” piece that reunites some of the cast and crew, including Spielberg, Johnston, Neill, Dern, and, Macy to revisit the work they did 20 years ago. The segments — Dawn of a New Era (25:25), Making Prehistory (20:16), The Next Step in Evolution (15:03) Finding The Lost World (HD; 27:40), Something Survived (HD; 16:30), The Third Adventure (HD; 25:20).   – are spread across the discs. Listening to them chatter on is nice but really, there’s little new to learn from these anecdotes. The box set comes with an insert providing you codes for digital downloads of the trilogy.