MICHAEL DAVIS: Spider-Man, Superman… you messing with my head. 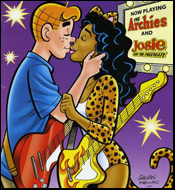 A long time ago in a galaxy far, far away…

Comics made the mainstream news only with some event regular folk could understand and think was worth going into a comic book store for the first time…ever.

Superman gets married. Which is the same thing as being dead.

Spider-Man gets divorced (because he became Latino and black).

Archie is booted out of the Tea Party (you know why).

The news that DC is being kicked out of major bookstore chains because of an exclusive deal they made with Amazon is messing with my head.

That’s not the only thing either, I read an article in Wired magazine recently that stated that iPads could both revolutionize and destroy the industry.

Again. My head is being messed with.

I don’t want to see mainstream media talk about comics unless it’s a new comic book movie, Comic Con or Archie uses the ‘N’ word during a argument with his black girl friend.

Yes, I know I’m being naïve. Yes I know that comics are a business and change is inevitable, yada, yada, whatever. I get that.

I long for a return to the good old days when the press would make a big deal out of The Death Of Superman and regular folk would be naive enough to buy dozens of copies because it never occurred to them that Superman would be back.

“It’s a comic book you moron.” I said to about a zillion people who were shocked that Superman was not dead forever so the 50 copies they purchased along with the 50 billion sold would not be so valuable as to put the kids through college.

I remember a “regular folk” about to pay a retailer $40 bucks for two copies of The Death Of Superman at a NY Comic Con when the very same issue was cover priced at a newsstand in the lobby of the Javits Center where the con was being held.

I told the guy about the newsstand price and assured him they still had plenty of copies left. He thanked me like I just handed him a winning lottery ticket. Man, was he happy!

The retailer, not so much.

Yes, mainstream press, give me that kind of comic book news and keep your gloom and doom for what you do best: Lindsey Lohan.