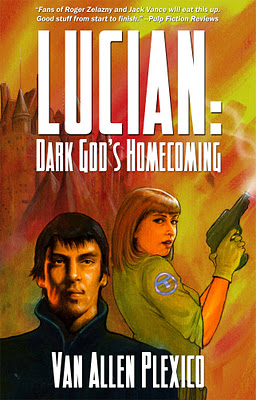 Smithton, IL (October 26, 2011) White Rocket Books proudly announces the release in Kindle format of LUCIAN: Dark God’s Homecoming, the acclaimed Science Fiction/Action/Mystery pulp by Van Allen Plexico (SENTINELS; GIDEON CAIN).
Drawing inspiration from the fantastic pulp-SF tales of Roger Zelazny (Chronicles of Amber), Jack Vance (The Dying Earth) and Philip Jose Farmer (World of Tiers), LUCIAN introduces us to the Dark Lord of the Golden City, an arrogant and selfish god whose insurgency to rule in Heaven failed and led to his exile on the human-occupied worlds of the far-future. When circumstances conspire to bring him back to his celestial City, Lucian discovers that most of his fellow gods and goddesses have been murdered and that, as the devil, he is of course the prime suspect. Now he’s on the run, barely a step ahead of his vengeful brothers and sisters, seeking evidence to prove his innocence (at least this once!) and to find the real killer—before his fellow gods catch him and end his immortal existence once and for all. Along the way, he becomes saddled with a beautiful and resourceful starship captain, who may force him to confront the hard truths about himself—if he doesn’t kill her first!
Says Van Allen Plexico of this new electronic edition: “The response this book has received in its paperback format, from Airship 27, has been more than gratifying. Readers seem to love this black sheep of a character and find themselves enjoying rooting for the bad guy! Now that it’s available on Kindle, I’m hoping it finds a whole new audience that will take the Dark Lord into their hearts!”
Pulp Fiction Reviews said of LUCIAN: “Fans of Jack Vance and Roger Zelazny will eat this up. Good stuff start to finish.”
Van Allen Plexico is best known for the popular SENTINELS series of contemporary superhero pulp novels, as well as for the sword-and-sorcery anthology GIDEON CAIN: DEMON HUNTER (with Kurt Busiek and others) and the ASSEMBLED! books, exploring the history of Marvel Comics’ Avengers. In 2011 he was nominated for Pulp Story of the Year (by the Pulp Factory, for “The Red Flame of Death,” from GIDEON CAIN) and Writer of the Year (by PulpArk).
White Rocket Books is a leader in the New Pulp movement, publishing exciting action and adventure novels and anthologies since 2005, in both traditional and electronic formats. White Rocket books have hit the Amazon.com Top 15-by-Genre and have garnered praise from everyone from Marvel Comics Editor Tom Brevoort to Kirkus Reviews.
On sale as of October 25, 2011, LUCIAN: Dark God’s Homecoming is a $2.99 Kindle e-book from White Rocket Books.
www.whiterocketbooks.com
On Amazon Kindle:
http://www.amazon.com/Lucian-Dark-Gods-Homecoming-ebook/dp/B005DSAZAE
Share