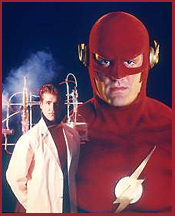 Walking home from food shopping, thinking about this week’s column. Thinking about all the “news that’s fit to print” (and some not) about the portrayal of women in comics. And I thought, has anyone written about the portrayal of men in comics? I’m talking down and dirty, hot stuff, glistening muscle, chest hair or no chest hair?, blue brown or green eyes, skin-tight costume, hunky super-duper M-E-N.

I’ll start. Off the top of my head, and in no particular order:

Now for the “live-action”:

uh, sorry ‘bout that. where was i? she said sheepishly.

No quibbling allowed on the next four. I am the columnist. I am allowed my all things Buffy. Anyway, maybe they started out as live-action characters, but they all appear in comics now. And don’t give me any lip about any of them not technically being superheroes. I don’t see you fighting demons and vampires and saving the world over and over again.

What’cha think of my choices, fellow geek women? Who are yours? Martha, y’ wanna start?