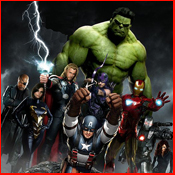 So, I just watched the trailer for The Avengers. I had to change pants. Because I pooped them. Why the premature defecation, you inquire? One movie with Iron Man, Thor, Captain America, The Hulk, Worthless Chick and Bow and Arrow Man… that’s why! In all seriousness (that would be the seriousness of a comic nerd geeking out at maximum dorkatude), it’s because this is the culmination of years of planning on Marvel’s part. And simply put, it looks like they aren’t going to screw it up.

In their own rights, each of the Marvel heroes who have been given a solo movie have done spectacularly well. Iron Man grossed over $318,000,000; Thor nabbed over $181,000,000; and the glorious Captain America took in over $175,000,000. Bob Wayne at DC once said “You vote with your dollars…” and by the looks of it, America (nerd and non-nerd alike) has proven its love for the Marvel movies.

Speaking purely from a fan-boy perspective, I’ve had nothing but mad love and respect for their cinematic endeavors. Iron Man was grounded in reality (for 4/5s of the film), and elevated by a continuously energetic performance by Robert Downey Jr., Thor was able to mix the completely ridiculous with powerful mythology and gave us perhaps one of the hardest to believe Avengers such that we as an audience believed a God could be a superhero. Captain America was able to build a fantastic period piece that gave the world an iconic and fearless leader. And now, Joss Whedon and Marvel Studios is cramming all of them (and a handful of others) into a single picture.

The basic fear most fanboys have had since the idea of an Avengers movie was dropped on our collective consciousness revolved around over-complexity. Rumors of Loki, the Kree/Skrull war, Red Skull, and numerous other villains danced on message boards. And let’s face it. Putting 4 or 5 “A-Types” into a team picture will potentially numb any chance at character building and nuance. If Iron Man, Thor, Captain America and The Incredible Hulk each required their own picture, how can they share the limelight? And on top of it… Samuel L. Jackson’s Nick Fury looks to be far more than just a cameo to boot. In simpler terms, The Avengers could easily become 10 gallons of Superhero in a 5 gallon hat.

If the trailer is to be any indicator of what the final product will be, I feel like Marvel is headed in the right direction. With the origins of every character now “public knowledge,” things feel natural. Iron Man and Captain America are both formidable leaders in their own right. In the trailer, they knock heads almost instantly. Whedon, who wrote the script, has a real clarity of character. Tony’s response is pitch perfect. Thor, while not uttering a word, carries himself as we expect… Regally, with a dash of arrogance.

Other glimpses of the titular characters are equally impressive. Mark Ruffalo’s Bruce Banner certainly holds himself with a quiet struggle. And the choice to make Loki the villain creates a real urgency for the assembling. A mad god? Yeah, that’s a job for the Avengers. I know this all seems a bit of a hyperbole of analysis, given that all we’ve really seen is 12,000 seconds of footage (with a solid third of that dedicated to ominous shots of New York, explosions, and Iron Man flying)… but I’ve watched the trailer a couple times now, and each time I retain the same silly grin.

Marvel’s missteps – Wolverine, Elektra, Daredevil (which I actually liked), and most likely one (if not more) of the Blade flicks – all shared a plethora of groan worthy moments. In each, the self-seriousness never felt earned by the fans. That, and Wolverine was given Clark Kent’s origin part-way through his movie. I wish I could pinpoint exactly why the Avengers, with its surplus of superheroes, seems to capture my glee, with no bitter aftertaste of “this could be a train wreck.” Could it be I just want it to succeed too much? With Iron Man, Iron Man 2, The Incredible Hulk, Captain America: The First Avenger, and Thor all leading up to this, it may very be such that I can’t fathom this flopping. I’ve dropped far too much cash at the multiplex to see Marvel bellyflop.

At its core, the Avengers is true fanboy porn. An assembling of Marvel’s best and brightest (and Hawkeye, cause, you know…) to fight the biggest of fights, is the stuff dreams are made of. To see it in live-action glory, with a bevy of computer effects and explosions is everything comic fans have dreamed of. I postulate it’s akin to The Dark Knight, where the general masses will appreciate our medium in a new light. It raises our collective mojo up just a notch. And anytime a comic nerd looks better than a Trekkie or LARPer… well, that’s just gravy. If you haven’t checked it out yet, do go watch the trailer… and come back here to tell me if I should stave my excitement, or just invest in a few more pair of paints prior to its debut.