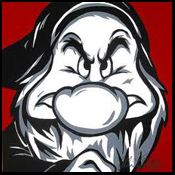 I’ve been in a grumpy mood all weekend. I don’t know why exactly… and I made it worse today because, being in a grumpy mood yesterday, I didn’t work on my paper for school – the topic being An Ethical Analysis of a Current Domestic or Global Issue, and normally I love to talk ethics and issues with a capital “I,” but I just was so grumpy, I couldn’t get my interest going – which of course I should have, but I blew it off.

Which meant that I had to do it all today, which led to me missing the Giants game against the Seahawks. Which they lost 36 – 25. And yesterday was Yom Kippur, but I was grumpy, so I blew off going to temple, too, which made me feel terribly guilty, but I grumpily chose to feel guilty rather than do the right thing and go to temple with my parents. Who are really getting up there in age and who knows if we’ll all be here next year, and would it really have been so horrible to go to temple for a few hours and make them happy?

Although I did fast. Sort of. Meaning I drank a lot of Diet Pepsi and smoked a pack of cigarettes while being grumpy and watching The Dick Van Dyke Show on TV Land. So I’m feeling guilty and grumpy about not going to temple yesterday, even though my parents were totally cool with it, and anyway, I haven’t gone to temple since 9/11, when I just decided that all organized religions totally suck.

And I’m grumpy because I’m not all that happy with my paper, which is called “There’s Something Happening Here” and is about the Occupy Wall Street Protests and the unethical practices of Wall Street (which of course is enough to make anyone grumpy) and the bullshit crap about Occupy Wall Street that’s coming out of the mouths of people like Sean Hannity and Rush Limbaugh and John Boehner (which should make everybody grumpy, but it doesn’t, which makes me even more grumpy), and there’s so much to say, but I had a word limit, which I went over, which makes me grumpy, and with my luck my professor is a member of the Tea Party, which will really make me grumpy if it’s true.

But this column’s supposed to be about comics.

So what did I read this weekend? Well, I wanted to critique Catwoman #1 of DC’s New 52, because I have a special interest in Selena, having written the first Catwoman mini-series, and it’s been making me grumpy that in that series I wanted Selena to deliberately throw the bad guy who had raped her sister off the catwalk, but the powers-that-be at DC at the time wouldn’t let me ‘cause “Selena a cold-blooded killer? Nonononono, bad, Mindy, bad,” but apparently now it’s okay to show Selena and Bruce doing the dirty on a roof in total Photoshopped glorious color. But my comic book shop guy screwed up the order for the second week in a row now, which has also made me grumpy.

But I did pick up Batgirl #1 by my gal friend Gail Simone and artists Ardian Syaf and Vicente Cifuentes along with Wonder Woman #1 by Brian Azzarello and Cliff Chiang, and Action Comics #2 by Grant Morrison, Rags Morales, Brent Anderson and Rick Bryant. Plus Green Lantern, Batwoman and Voodoo. But it’s making me grumpy that I’m behind the eight ball and it feels like everybody else has already put their two cents in.

Gail does her usually superb job writing Barbara Gordon, and I’m trusting her to answer why Barbara remembers being shot by the Joker and being in a wheelchair for three years if none of the characters are supposed to remember their previous incarnations. Or is it that she just doesn’t remember her time as Oracle? But I really like that the emotional and psychological reverberations of the Joker’s attack are still there. It would make no sense if Barbara was just “la-di-di-dah.” I’m trusting Gail to follow through with this for quite a while. No instant fixes, please, girlfriend! The artwork made me a little grumpy though.

Wonder Woman is always her best, imho, when her Hellenic background plays a strong part in her book. Which is why I loved Wonder Woman! I especially liked the cape worn by unidentified bad guy who pulls a “Godfather” on the horse in the stable. (The bad guy is only unidentified if you’ve never read any Greek mythology and so don’t get the significance of that particular cape.) Brian Azzarello does his usual brilliant job at dialogue, dropping hints and making the characters come alive. The artwork definitely did not make me feel grumpy.

Action Comics #2 is sucking me in but good! Special highlight for me was the “exclusive peek behind the scenes” at the development of the characters and artwork. Especially the artwork. As a writer who can’t draw beyond a stick figure, I love seeing (or reading) how an artist makes the magic.

I wasn’t feeling grumpy there for a few minutes, but now I’m grumpy again because I didn’t have time to read the rest of my haul, which puts me even further into the backfield. But I’ve run out of room anyway, so I guess I shouldn’t be grumpy.

Except that I’m running really, really late on this column (again!) and that’s making me grumpy.