Summit Signs On For Area 52 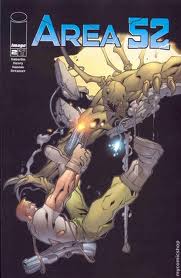 Summit Entertainment just acquired screen rights to Area 52, and will develop a live action adaptation based on the four-issue comic book series from Brian Haberlin published by Image Comics in 2001.

Lorenzo di Bonaventura and Mark Vahradian will produce, and JC Spink will be executive producer through Benderspink. The comic focused on a top secret warehouse in Antarctica called Area 52, a government storage dump for otherworldly discoveries, manned by a ragtag group of misfits who have been exiled to the middle of nowhere to staff it. When an alien killing machine is accidentally hatched in this repository, the group must band together and use the stored mythological weapons and artifacts to save themselves and the world.

via Summit Signs On For ‘Area 52′ With Lorenzo Di Bonaventura – Deadline.com.