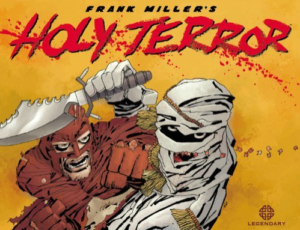 You probably know somebody who changed a lot after 9/11.

That person was reasonably cool, you hung out. Maybe you were in a wedding party together, maybe you knew them from school. But after 9/11, they went extreme. It was like talking to a different person– someone who you would have sworn didn’t have a mean bone in their body suddenly talked about killing anybody wearing a turban. (If you don’t have someone in your life who fits this description– and God, how I envy you– a good example in popular culture would be Dennis Miller, who went from ex-Weekend Update anchor to Fox News Commentator.) Maybe they had a reason, maybe not, but you were shocked by how far they might go.

And if there’s any comic book character who embodies how one bad day can twist you and change you for life, it’s Batman. Which is where the story of Holy Terror really began.

This book, finally in stores this week after numerous delays, was originally conceived as Frank Miller having Batman fight Al-Qaeda, and the serial numbers are barely filed off. We have a caped vigilante who is in no way Batman, a female cat burglar who is in no way Catwoman, and a cop who is in no way James Gordon. Never mind that this is coming out from Legendary Comics, the comic book arm of Legendary Pictures, who is working closely with Warner Brothers on the current Batman films. It’s not Batman.

So we start off with a chase scene between Not-Batman and Not-Catwoman which degenerates into foreplay– think what we had in last week’s Catwoman #1, but even more explicit– which is climaxed (sorry) with an explosion.

The explosion, setup, and aftermath goes on for many violent pages and quite literally brings us to the midpoint of the book. And then the book gets into the first of a number of montage scenes that don’t advance the story and seem to be put in to push random buttons. What follows, of course, is about what you’d expect to see with Batman– sorry, The Fixer– goes up against Ra’s Al Ghul and the League of Assassins– sorry, Al Qaeda.

At this point, in the reading, you begin to notice something: there’s nobody here helping Frank at all. No colorist, even though a lot of the pages look like they were intended for full color– but that could just be leftover from when it was going to be published by DC. No letterer, it’s all hand done– but Frank lettered all of [[[Sin City]]] himself, that’s nothing odd, even though the lettering looks a bit cruder than his previous lettering.

But it’s the epilogue that points it all out the solitary nature of this work, and in a way, saves the book. I don’t want to give it away, nor do I want to give you much of my interpretation, but in a page that evokes the best of Steve Ditko, we see the true impact of the event and the hallucinatory aftermath. And in that, we see the realization that you hope has dawned on that friend of yours ten years after September 11, the realization that you went farther than you ever thought you would go. Like Batman, one bad night can change you forever– the question is whether will it change you forever, or whether you just let it pass like a horrible dream.