Coming in October from 12 Gauge Comics. 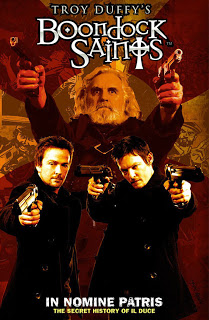 THE BOONDOCK SAINTS, VOL. 1 TP: “In Nomine Patris”Writers: Troy Duffy and J.B. Love
Artist: Guus Floor
152 pages
$19.99
THE SAINTS ARE COMING!
Launching out of the wildly successful film franchise — THE BOONDOCK SAINTS and THE BOONDOCK SAINTS II: ALL SAINTS DAY — this inaugural comic book collection chronicles the first story to take place outside of the cult-hit films. Written by BOONDOCK SAINTS creator/writer/director TROY DUFFY and comic scribe J.B. LOVE, the “In Nomine Patris” saga is the perfect companion to the films.
Discover the true story behind the original saint, Noah MacManus (IL DUCE), and his bloody war against New York’s 1960s Underground Crime world.
And what of the beloved MacManus Brothers? For the first time ever, Troy Duffy reveals some of what happened between the films, as well as the brother’s journey to uncover the full extent of their family’s legacy of violence, leaving a path of vengeance in their wake!
Including a foreword by Connor MacManus himself– actor SEAN PATRICK FLANERY– never-before-seen art, a cover gallery, all six comic issues, and more— this all new chapter in the Boondock Saints Saga is what the fans have been waiting for! Don’t miss it! 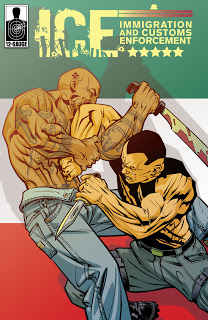 ICE #4 (of 4)Writer: Doug Wagner
Artist: Jose Holder
Cover Artist: Brian Stelfreeze
Colors: Michael Wiggam
* Bonus co-feature by Doug Wagner and Brian Stelfreeze
32 pages
$3.99
The battle for simple justice has turned deeply personal for ICE agent Cole Matai, who has left his badge in the states and illegally crossed the border into Mexico, seeking only revenge after the shocking events of the last issue.
With his goal being to finish off Luis Morales once and for all, Cole takes the battle straight to the most ruthless criminal he’s ever encountered. Two men, two knives, and a battle for the ages. It has all led to this….ICE #4 will not disappoint! 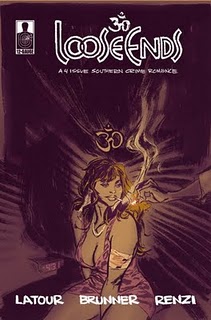 LOOSE ENDS #4 (of 4)Writer: Jason Latour
Art and Cover: Chris Brunner
Colors: Rico Renzi
24 pages
$3.99
“With guns drawn, the deadly crime lord Batista charges toward the seedy Miami hotel room where Detective Rose’s plot is finally hatched. It seems that the only person standing between Sonny, Cheri, and this vicious gangster is the treacherous Detective Flynn and his facility for murder and violence. Or is he?
Join us for all this and more, as we draw the blinds on our shocking conclusion.”
LOOSE ENDS is a gritty, slow cooked, “southern crime romance”, that follows a winding trail down Tobacco Road, through the war torn streets of Baghdad, and into the bright lights and bloody gutters of South Florida…12-Gauge style. 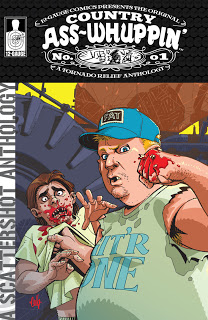 COUNTRY ASS-WHUPPIN’: A Tornado Relief Anthology (One-Shot)Writers: Jason Aaron, Sean Patrick Flanery, Doug Wagner, Nathan Edmondson, and others
Artists: Jason Pearson, Brian Stelfreeze, Jason Latour, Rebekah Isaacs, Tony Shasteen, and others
Cover A: Cully Hamner
Cover B: Kody Chamberlain
48 pages
$5.99
On April 27, 2011 a string of deadly tornados ripped across the southeastern United States, with the brunt of the devastation focused on the state of Alabama.
In an effort to help some of the victims who are still putting their lives back together, many of the finest comic creators working in the industry today, all with roots or ties to the south, have banded together and donated their time for a uniquely southern anthology: COUNTRY ASS-WHUPPIN’.
The stories have one thing in common– they are all about people in the south kickin’ ass or getting their asses kicked. Enjoy both tall-tales and true stories, told by some of the best in the business; including Jason Aaron (X-MEN: SCHISM, WOLVERINE), Sean Patrick Flanery (BOONDOCK SAINTS), Cully Hamner (RED, BLUE BEETLE), Brian Stelfreeze (ICE, WEDNESDAY COMICS), Rebekah Isaacs (IRON AGE, ANGEL & FAITH), Jason Pearson (ASTONISHING X-MEN, DEADPOOL), Nathan Edmondson (WHO IS JAKE ELLIS?) and many more. Don’t miss this celebration of southern culture, while having fun and helping those in need.
100% of the proceeds from this book will go directly to the Red Cross Disaster Relief Fund, so please ask your retailer to reserve your copy today! 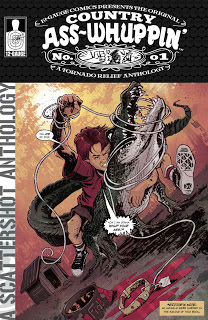 To see all of 12 Gauge Comics’ offerings, visit http://www.12gaugecomics.com/.