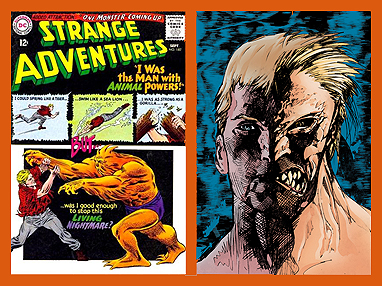 Well, here’s something strange. Within a 72-hour period last week a half dozen people asked me if I had read the new, new Animal Man. During that same period, my daughter was asked the same question by one of her friends. Then I had lunch with comics writer Paul Kupperberg, so I asked him if he read the book. He said no, not yet, but a number of people told him he should.

Hmmmm. Word of mouth is either the best or the worst type of publicity. I noticed not a one of these folks said it was great; just that it was worth reading.

I enjoyed the original Animal Man – the one that was created by Dave Wood and Carmine Infantino in Strange Adventures 180, some 46 years ago. It was unusual in that it was only occasionally published, and the lead didn’t get his costume (one of Carmine’s best) until the third appearance nearly a year later. His run – more like a bunch of skips and hops – was brief, but it clearly had an impact on us Baby Boomer fanboys. Animal Man was more of a cool concept than a fan fave.

Because I’m not quite paranoid to believe that all those people who recommended the book to us were part of a vast conspiracy, I approached Jeff Lemire and Travel Foreman’s Animal Man volume 2, number 1 without preconceptions.

Gone is the cool Infantino-designed costume, replaced by something that was clearly influenced by the original: no more contemporary in design, but with a more striking color scheme. We start with Buddy Baker’s home life, and here we indulge a bit in the married life superhero chiché. He’s not henpecked the way The Web was back in the 1960s (one of the first, if not the first, costumed hero with a “realistic” married life); Lemire cleverly uses the rough parts of family life as exposition.

It is that very family that is the root of this first story arc. In the 22-page format there’s very little room to establish the characters in this new reality and really get you deeply involved in an actual story, and Animal Man 2.1 does a better job of it than most of The New 52 stories I’ve read so far. Not as good as Mister Terrific #1 in terms of the quantity and depth of story, but more compelling from the perspective of character.

That seems to be what Animal Man is all about: character development within the framework of a family where the father has superpowers. I say “seems to be” because, well, hell, we don’t know. It’s just the first issue. But this beginning gives me hope.

I always get hinky when I think about how a DC series will get coopted as it is thrust into the DCU – sorry, make that DCnU – but I’ve learned to leave such speculation to time and historical inevitability. And hope that Animal Man beats the odds.