JIM ANTHONY AND THE MARK OF TERROR-NEW FROM AIRSHIP 27! 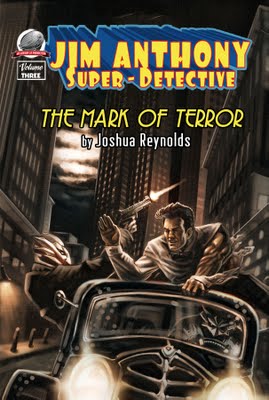 From the early days of his crime fighting career, comes this brand new adventure of the man known as Jim Anthony; Super Detective.  Half Irish, half Comanche and All American, Jim Anthony finds himself caught up in a world-wide conspiracy of murder and carnage as two ancient Greek cults square off against each other in modern times; each vying for world dominance over the other.

When several of New York’s leading business men suddenly go insane and begin committing suicide, the police are baffled and reluctantly look to the Super Detective for help.  Soon, with the aid of a renowned archeological historian and a spunky, fearless female reporter, Jim Anthony is quickly caught up in a mystery like no other he has ever faced before. With danger from deadly masked assassins at every turn, the famous adventurer’s own life is soon hanging in the balance as he becomes the primary target of both warring cults.

Acclaimed New Pulp scribe, Joshua Reynolds delivers a fast paced, non-stop action thriller that is pure pulp gold.  “This is Reynold’s second Jim Anthony story for us,” reported Airship 27 Productions’ Managing Editor Ron Fortier.  “It’s very clear in how well he writes this classic hero that he has a genuine affection for the character and that comes across on every page.”  Accompanied by nine illustrations from artist Isaac Nacilla and a stunning cover by painter Jeff Herndon,  with designs by Rob Davis, JIM ANTHONY – SUPER DETECTIVE – THE MARK OF TERROR is the latest in an on-going series of brand new Jim Anthony adventures from…