Aaron Rosenberg has No Small Bills 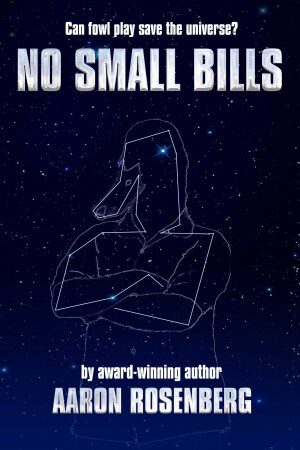 ComicMix contributor Aaron Rosenberg is a prolific writer, editor, and graphic designer who has written role playing games, comic books, fiction, and non-fiction. As a member of Crazy 8 Press, he has the honor of being the second author to launch an original work through the ePublishing site, a seriocomic work called No Small Bills, which goes on sale later this week (UPDATE: Already available now at Barnes & Noble). We sat down with Aaron to get some background on the project.

ComicMix: Aaron, you’re a writer of fiction and non-fiction. Where does No Small Bills fall?

Aaron Rosenberg: Gosh, I really hope it’s fiction! If that story’s real, we could all be in a lot of trouble!

CMix: Seriously, you’ve written fiction and non-fiction in a variety of genres, but you’re not known for comedy. Was this a stretch as a writer?

Rosenberg: It was, yes—and it wasn’t. It’s not what I normally write, but anyone who knows me in person knows that I can get a bit silly at times, so this was a chance to actually write that side of myself. As one friend commented, it was the first book of mine he’d read where he saw my actual voice instead of my “authorial” one. I also went about it much more freeform than usual—I’m normally an obsessive outliner but with No Small Bills I actually started with a basic notion and just let DuckBob lead me along on his merry little journey for a while, so in a way it was very freeing.

CMix: Where did the notion for NSB come from?

Rosenberg: It started as a joke, years back. I honestly don’t remember the circumstances, but I made some comment about a guy with a duck head, and that led to my slapping together a very silly picture of a duck-headed surfer with the label “DuckBob Surfs the Ion Storm!” And then I thought he’d be a fun character to write about, so I copied that line into my “Notions” folder, along with the second line “A fun-filled story of a man-duck’s quest for the perfect galactic wave.” And it sat there for a long, long time, until I decided to try my hand at writing something silly for once. Then it seemed like the perfect time to trot DuckBob back out and let him get some air.

CMix: Many writers are their character’s alter ego; can that be said for you and DuckBob?

Rosenberg: Well, DuckBob certainly bears some similarity to my snarky side. I don’t know about the rest of him, though. I hope I’m not that lazy! Or loud! We do have similar taste in shirts, though. 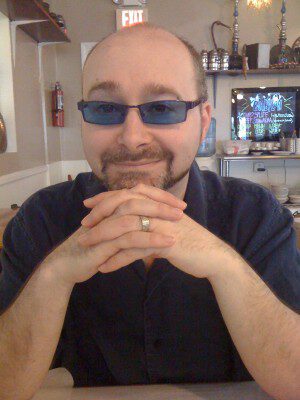 CMix: How challenging is it to write fiction when working in your own universe?

Rosenberg: It was a treat, actually. I’d been laboring in Tie-in Land for several years, and while I do enjoy that—who doesn’t like getting to write books about some of their favorite characters from TV, movies, and video games?—it was a lot of fun to write something that was entirely mine for a change. And DuckBob’s world is just as silly as he is, so it was also exciting to just cut loose with my silly side and make up aliens and worlds and situations that were totally off the wall. The hardest part was keeping it consistent, trying to come up with one wacky world or creature after another. I guess once people read it and start writing reviews or comments I’ll know how well I managed.

CMix: Does NSB lend itself to a sequel?

Rosenberg: Oh, absolutely! I already have two planned, in fact. The first one, Too Small for Tall, focuses on the MiB agent DuckBob nicknamed Tall as he tries to go back to his old job on Earth, only to discover that his recent adventures may have made him ill-suited for a “normal” government job anymore. The third book, Three Small Free Widgets, is all about the alien tech-guy Ned, who goes back home to visit and discovers there may be a lot more connection between his home planet and Brooklyn than he ever realized. DuckBob will of course appear in both books. The three books together form the Small Silly Space Trilogy. That’s all assuming people enjoy No Small Bills enough to want sequels, of course.

CMix: Previously, you’ve written in other shared universe, either media tie-in worlds or settings you helped create. What are the benefits and challenges to writing in a shared world?

Rosenberg: The benefit is that you’ve got an existing world to play in, and often existing characters. When I was writing Eureka novels, for example, I could refer back to the episodes to make sure I had Sheriff Carter’s voice right, or that I’d remembered something about Fargo’s past correctly. You know what these people look like, how they sound, how they act, what their world is like—it’s all there for you to use. That allows you to jump right to plots because you’ve already got the setting and the people fully formed.

The challenging part, of course, is that you have to stay true to that. You can’t decide that Sheriff Carter is suddenly a heavy drinker, for example, because everyone who watches the show knows that isn’t the case. You can’t have Jo fall in love with Henry when everyone knows she loves Zane. You have to fit your plots within this existing framework and keep it all consistent with everything that’s gone before.

CMix: With the Tales of the Scattered Earth and OCLT, both projects from Crossroad Press, you’re both a writer and one of the creators. Does that change the dynamic for you?

Rosenberg: Oh, absolutely! With Scattered Earth, David Niall Wilson, Steve Savile, and I sat down and came up with the world bible, as it were—we mapped out the basic setting, the general history, the overall storylines, and a few other elements before each claiming a corner of our own to play with. With OCLT, David and I worked out the series bible and created all of the core characters, then set it up so either of us could use any or all of them and other writers could use them in their OCLT stories as well. So in both of those cases I was one of the people actually building the setting and the characters, which meant I could work in elements I already knew I’d want to write. It’s like the best of both worlds—I get to play in an existing world with a lot of other writers, but I was able to build in features I knew I’d want there, and since I’m one of the creators I have a lot more say in what I can and can’t do. :)

CMix: NSB is the second original release from Crazy 8 Press. How is it going so far?

Rosenberg: It’s actually our third release—we did Peter David’s new novel The Camelot Papers first, then the round-robin novella “Demon Circle” to support the Comic Book Legal Defense Fund, and now No Small Bills. But it’s been good so far. There’s a learning curve, of course, and it also takes a while to draw interest and attention for Crazy 8 and the various projects, but I think we’re building slowly but surely, and it’s exciting to be the masters of our own destinies.

CMix: What pitfalls have you found in self-publishing?

Rosenberg: The hardest things are keeping on track and handling everything at once. You don’t realize just how many people go into publishing a book until you have to do it all yourself! And there often isn’t anyone to delegate things to, so you have to do a lot of juggling to keep everything rolling along. That’s hard. Plus Crazy 8 is a loose conglomerate of friends, which is nice because we’re less restricted but it also means that there’s no one person at the helm—we’re all sharing the leadership role, and that can lead to some head-butting and negotiating as we try to figure out the best way to do things so that everybody stays happy.

CMix: You’re a writer and a graphic designer. You do your own covers. Which is more creatively satisfying?

Rosenberg: Ah, that’s an impossible question to answer! I love both. I was actually in illustration major in college before I switched to English, and I’ve been drawing as long as I can remember, so it’s really cool to get to use those skills again to do covers. At the same time, I’ve loved to write and to tell stories ever since I first learned how, and I’d never be able to give that up. The two use different sides of my creative brain, but both of them give me the same rush when I’ve gotten it right, and when I produce something that other people appreciate and enjoy.

CMix: After NSB, what else can readers expect from you?

Rosenberg: My next novel after NSB will be Incursion, which is my first novel in the OCLT series from Crossroad Press. After that I’m doing Honor of the Dread Remora, which is the sequel to my space-opera The Birth of the Dread Remora, continuing the adventures of the space-pirate ship and its crew as part of the Tales of the Scattered Earth series. After that I’ve got a couple of other projects planned, including several collaborations, but those don’t have hard-and-fast schedules yet.

And, hopefully, there will be more DuckBob in my future as well!