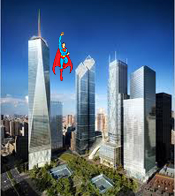 Breaking news: a truck bomb has killed at least 50 American soldiers in Afghanistan.

Yesterday I read the “debut” issue of Action Comics #1. The one with Superman in a t-shirt, jeans, and Timberland boots.

It’s a different look for him.

The story opens as Superman breaks into a corporate (corporate = evil) meeting and manhandles the CEO (CEO = malevolence). The police (hired mercenaries?) rush in. They order Superman to put down the CEO. His answer, in the last panel on page three: “Just as soon as he makes a full confession. To someone who still believes the law works for the same for rich and poor alike…”

I turn the page.

Two-page spread, splash panel. Superman is standing on the edge of the roof, holding the CEO up with one hand, threatening to drop him. His eyes are burning, glowing red. He’s firing up his heat vision, eyes burning and glowing red. The CEO is screaming for someone to save him. The cops have their weaponry aimed at him. It’s a stand off. And Superman finishes his thought:

I could write a thesis on how American culture has changed since the last ten years. But better men and women, better writers and thinkers have done that already, so I won’t.

But I will say that I believe there is a disease that is rampant in this country. It’s a highly contagious disease that causes its victims to change facts. In America its sufferers believe that the United States and its government has always “played fair.” That the original colonists never slaughtered the native culture they found here or that 100 years later the U.S. Cavalry didn’t lace blankets with smallpox to kill the “Indians” of the Great Plains. That those who wrote the Declaration of Independence and the Constitution of the United States of America worked tirelessly until slavery was no more in the United States. That slavery itself was a fair and equitable system in which master and slave worked for the common good. That President Franklin D. Roosevelt, a scion of one of the wealthiest families in America, was a socialist. That Eisenhower was a tool of the communists. That the Civil Rights Act was propagated and staunchly defended by Southern Republicans and fought with tooth-and-nail by the Democrats. That the World Trade Center was brought down by controlled demolition explosions and that a missile hit the Pentagon was launched by “elements” inside the Bush administration. That Social Security is a Ponzi scheme. That Obama isn’t an American.

This is the culture of America today, September 11, 2011. It’s a suspicious and cynical culture that would rather dream nostalgic dreams of a past that wasn’t than to work together to shape those dreams into reality.

But is it so different from the culture that shaped two kids from Cleveland in 1932, two kids who believed in “the American Dream” of truth and justice for all, and created an avenging crusader a “superman” who beat up mobsters and wife beaters, profiteers and lynch mobs? That culture supposedly welcomed immigrants, and then barred them from communities and colleges and jobs. It was a culture that restricted voting and allowed segregation. The Superman created in 1932 and who debuted to the world in 1938 was a result of the suppressed anger of two Jewish boys who saw the inequities and untruths in the American reality, but still believed in the American dream.

Ronald Reagan, for all his faults, was right when he spoke of America as that “great shining city on a hill.” America, the idea of America, is still, will always be, in my not-so-humble opinion, the quest, the Arthurian legend, come to life.

My question is, and my worry is, how can the kids reading Grant Morrison’s 2011 version of Superman still believe in that quest, those ideals, that American dream that the hero has always represented when he clearly states, That Ain’t Superman?