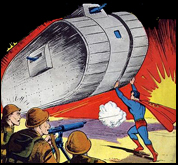 This is an amazing Superman. Not totally invulnerable, can only leap mover tall buildings and not fly, defying authority, fighting criminals and corrupt politicians, on the side of the little guy – really amazing stories. What? Grant Morrison’s Superman? No, I’m not talking about that. I haven’t read his new version although I’m sure it’ll be good; Morrison wrote All-Star Superman, one of my favorite run of Superman stories.

No, I’m talking about the original run of Superman stories, by the creators – Jerry Siegel and Joe Shuster. I read them in one of the DC Archive books and I was floored when I read them. This was not the Superman I grew up on; he was actually a lot more interesting.

In one story, he gets a bad guy to talk by throwing him off the roof of a building, catching him, and then throwing him off again. He keeps doing this as he worries about whether or not he might have butterfingers. In another story, there’s a series of slums that are public housing and the buildings are in terrible shape. Supes’ solution? He pisses off the authorities to the point where they try to bomb him. He’s running in and out of the slum buildings that wind up flattened so that the authorities have no choice but to build new ones. And he’s laughing while he does it. The man’s a maniac – a Supermaniac.

In another story, an innocent man is about to be executed. Supes gets proof he’s innocent and goes to the governor. It’s almost midnight and the governor is in his pajamas and robe. There’s a storm and the phone lines go out. No way they can contact the prison in time. Supes grabs the governor and hurtles through the night, running and leaping at high speed to get the governor there in time to pardon the guy.

In another, Superman deals with a wife-beater and gives the jackass a taste of his own medicine.

Is the art a little primitive by today’s standards? Perhaps. Are the stories a little simple by today’s standards? Maybe – but they move like a speeding bullet. Superman at the start was very much a character of his time, born in the Depression, where the public’s confidence in their political institutions were low, where crime seemed rampant, and the little guy/gal seemed to have no-one on his/her side. Superman wasn’t bound by the courts or the law; he was an outlaw for justice.

Sound like today? Oh yeah. A Superman that hearkens back to his roots might be just what we need. I don’t know if that’s what Grant Morrison is doing but, from interviews he’s given and fro9m what I read in articles, it sounds to me as if he read those old stories, too, and has gleaned from them a basic, more primal Superman. Yesterday’s Man of Tomorrow written for today? I could get into that.