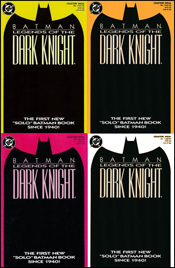 When my mother asked me why I was buying up all the comics I could, I made an attempt to satisfy her underlying problem. “I’m not wasting my money, Mom, these comics are worth money!” She bought that. Years later, she asked me when I was going to sell them and enjoy the tidy profit. Wouldn’t you know it? All those copies of Night Man and Mantra weren’t worth the paper they were printed on. And my Walgreens copy of Cyberforce: Bloodstryke? Nary a nickel would be given to me by any one aside from maybe Marc Silvestri. Had I been smart enough, I would have picked up the holo-foil variant cover, and nabbed me a dime.

You see kiddos, when I got into comics, the ‘Variant’ cover ruled the land. In the go-go-nineties, when people suddenly thought comic books were highly coveted collectables, the publishers followed suit by releasing a veritable tidal wave of ‘comicas con variantas.’ Short supply equaled high demand, and before you know it… even your next-door neighbor (who can’t tell Batman from Man-Bat) is collecting comic books. Me personally? I couldn’t care less. Have a seat. Get comfy. Let me pull out my jar of poetry wax. It’s time to polish up the Rant-O-Tron 5000.

The same goes for comic books. Maybe I’m alone in this sentiment (and I hope in fact that I’m not) but comic books are meant to be read. Comic books as collectables just irks me a bit. Scratch that. Comic book collectors who don’t enjoy the medium for anything other than the potential profit? They irk me.

Unlike commemorative plates, baseball cards, or Hollywood memorabilia, comic books are made with the intent to entertain. Writers sat at typewriters concocting amazing fantasies for their fictitious creations. Artists slaved over their drawing boards meticulously adding nuance, detail, and action to the written word. And a literal team of other players had their hands in the pot… from the letterers, colorists, inkers, designers, and editors who spent their work week fretting over deadlines to eventually put their book on a store shelf… and you don’t even take the time to read it? Next time do me a favor, buy a limited edition Billy Bass.

But Marc, you protest, what about those smart people who minted thousands upon thousands for their rare Action Comics #1, or Detective Comics #27? What about them, indeed. Neither were a “Holo-Foil Sketch Blank Autographed Variant.” And 75 years from now, if you think your copy of the “B” cover of Justice League 2011 will be worth thousands of dollars more than the standard “A” cover… well, you are welcome to dance on my grave if it’s true.

Suffice to say, I’ve never bought a comic strictly for the purpose of profiting. And for those who do, while I don’t deny you the right to spend your money however you see fit: I scoff at you on principle alone.

For the publishers who produce them, it must seem like a brilliant idea. In John Ostrander’s piece a few weeks back, we learned that the comic book market is such that the publishers don’t sell to the consumers. They sell to retail shops who in turn sell to us. So their spin-off squeeze play is nothing more than an attempt to hike up sales a bit more. Dynamite alone must produce an Alex Ross variant every other week, for every other book they publish. In turn the shops might feel compelled to order enough of the base book to “earn” those packed-in variants, and in-turn mark them up for sale to the saps, err, collectors who come into their stores. I love Alex Ross’s work kids, I do. But they day I’m chasing down a Green Hornet Year One Sketch Cover Variant C, break a NASCAR Jeff Gordon plate across my face. Before anything else, a comic is there to be read and enjoyed.

Agree? Disagree? You know the drill. Let me have it below.