In response to requests since ALL PULP started as well as the posting of the great piece you’re about to read today, ALL PULP is kicking off a new column (logo to come soon) !  NUTS AND BULLETS will feature articles from creators and publishers of New Pulp and will focus on the process of putting out Pulp today.   It will err on the technical side of things, how to format, how to develop a character, how to establish pacing, how to write a back cover blurb…and as for the inaugural entry, How to Build a Pulp Cover.   New Pulp creator and Airship 27 Publisher Ron Fortier shares with ALL PULP a fantastic process for creating and designing modern Pulp covers.  Enjoy NUTS AND BULLETS and expect more helpful hints to come!

Greetings. This week we are going to do something we’ve done several times before on my Flight Log  that many of you have enjoyed a great deal; show how we put together one of our Airship 27 Productions pulp covers. Step by step you’ll see our planning and how we helped our artist execute the final image for a book now going into final production.

Earlier in the year one of our regular writers, Joshua Reynolds had submitted a full length Jim Anthony Super Detective novel entitled MARK OF TERROR. It’s a great read and somewhere in the middle of the book there is an action sequence wherein Jim chases an assassin wearing a gargoyle mask out of a theater and onto a busy nighttime New York street. The killer jumps into a sedan driven by another mask wearing colleague and they peel away, only to have the Super Detective come charging off the sidewalk and leaping onto the top of the vehicle. As it careens wildly through the streets of Manhattan, the killer leans out the passenger window and attempts to shoot Anthony off the car. Upon reading this sequence in the book, we knew immediately it was what we wanted for our cover. Then came a stroke of real good fortune. Earlier in the year, we had the opportunity to meet several local artists who live here in Fort Collins. One of them is a truly talented young fellow named Jeff Herndon. When Jeff learned about Airship 27, he offered to paint a cover for us and we immediately recalled the that Jim Anthony book waiting in the wings. 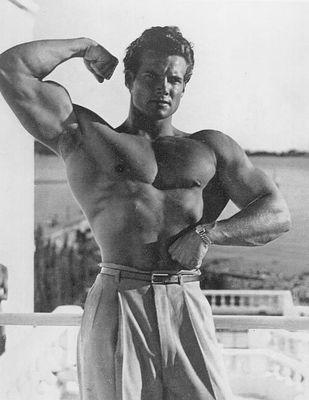 The first thing we did was explain the character to Jeff and told him our ideal image of the Super Detective was none other than the late body-builder turned actor, Steve Reeves, who made some classic Hercules movies back in the 1960s. We then sent Jeff half a dozen shots of Reeves we found on the internet like the one above. This was how we wanted our Jim Anthony to appear on the cover. 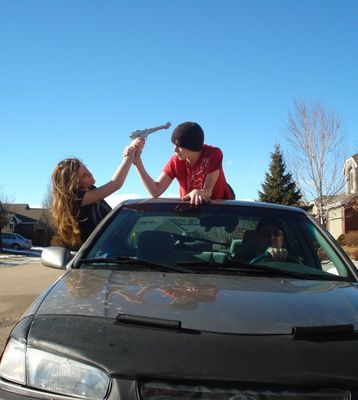 Next we explained in great detail to Jeff what action scene we wanted him to bring to life with his paints. To help him better visualize that dramatic moment in the book, one Sunday afternoon our son Alan and grand kids, Cora and Alex, allowed their granddad to photograph them on one of our cars in a set-up pose mirroring the action in the book. We took several photos from different positions. The one above was the one that best suited our needs and would help Jeff better mentally envision what we were after. 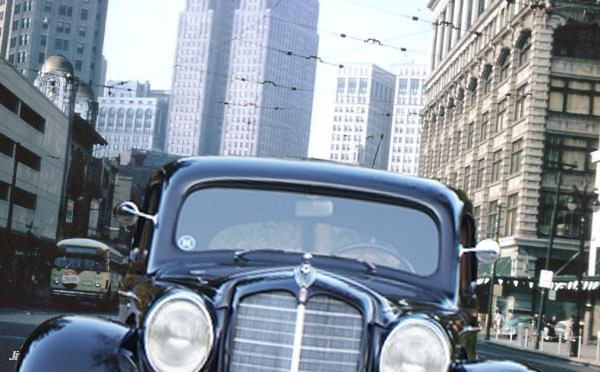 But a neighborhood street in modern day Fort Collins, Colorado bears no resemblance to a busy Manhattan downtown scene. So once again we headed for the internet and found a photo of a New York city street and another of a proper mid-1930s automobile. We sent these off to our Art Director Rob Davis and he photo-shopped them together into the above picture. Now Jeff could use these elements as the basis for his drawings and eventual painting. 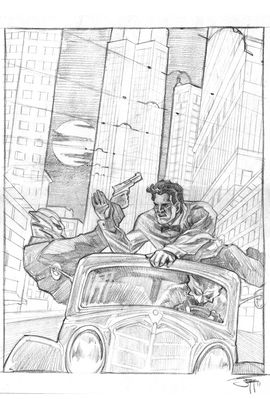 Using all the various elements we had provided him with, along with our description of the action, Jeff then proceeded to whip up this amazing drawing. Note the moon in the background sky, indicative of how this was about to become a night time image. Once we gave him the thumbs up to commit to paints, he really went to town. 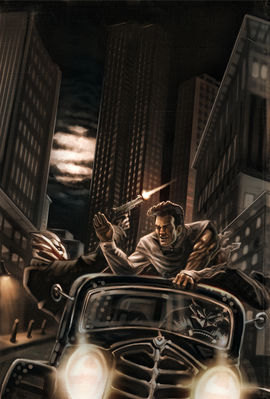 For the next few weeks Jeff worked diligently at bringing his drawing to full color life and he succeeded far beyond our wildest imagination. The night he sent us a jpg. image of the finished painting, Rob and the Air Chief were delighted. Now here was a truly dynamic pulp cover. There remained only one final step, for Rob to design the text and logos etc. to finish the entire cover. So inspired by the art Jeff had accomplished, Rob wasted no time in bringing this dazzling project to a proper conclusion. 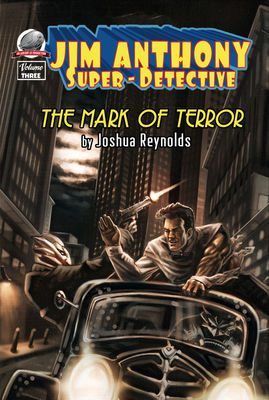 And above is the finished cover to what will be our 39th title – JIM ANTHONY – SUPER DETECTIVE – MARK OF TERROR by Joshua Reynolds, cover painting by Jeff Herndon, with nine terrific black and white interior illustrations by Isaac “Bobit” Nacilla and designs by Rob Davis. Currently the book is in the final stages of proofing and we hope to have it out within the next two weeks. Rest assured we will reprint that cover shot here when it is finally on sale. This is our third book in our Jim Anthony series and we are all damn proud of it.

Finally, the icing on the cake arrived only last week when we learned a local art gallery here in the Fort is launching a brand new show featuring ten local artist, one of which is Jeff. And most likely this painting will be on display there in Jeff’s collection. The show runs between 3 Sept and 5 Oct. and is located at the Rendition Gallery, 251 Jefferson St., Fort Collins, Co. Valerie and the Air Chief plan on attending opening night, we’ll bring our camera along to snap some shots of Jeff and his amazing work.