BEN Books is proud to announce that the Lance Star: Sky Ranger “One Shot!” comic book by New Pulp Creators Bobby Nash and James Burns is now available in digital format at Graphic.ly for only $1.99.
http://graphicly.com/ben-books/lance-star-sky-ranger-one-shot/1

November, 1941. Ace Air Adventurer Lance Star accepts a dangerous mission into an enemy stronghold to stop the Nazi’s from uncovering plans for a weapon long believed destroyed. Lance flies a solo mission to Kiev where he is to plant explosives and destroy a weapons facility when he runs into an old enemy. Now, Lance is faced with a choice. Complete the mission? Or take down the Sky Ranger’s greatest adversary? He’s only going to get one shot at this. Will he choose the mission or revenge? 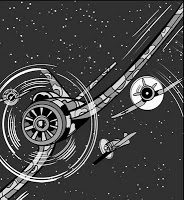 Learn more about Lance Star: Sky Ranger “One Shot!” and the Graphic.ly edition at http://www.lance-star.com/.