GOING BEHIND THE VEIL WITH SEAN ELLIS

BEHIND THE VEIL by Joshua Pantalleresco

Sean Ellis is the talented author of multiple novels, including Heaven’s Shroud and The Chessmen series.  He is also the creator of his own New Pulp character, Dodge Dalton, which has currently two books out in his series.  Dodge Dalton In The Shadow of Falcons Wings and Dodge Dalton and the Outpost of Fate are as high adventure as they sound and after talking to Sean, Dodge’s origins come Ellis’ own sense of adventure .

Sean admits, “When I saw Raiders of the Lost Ark as a kid, I fell in love with adventure stories, and I really became fascinated with the pre-World War II time period. It was a turning point for the way we saw the world in terms of exploration and technology.  The world of the 1930’s was still pretty big and there were a lot of unexplored places.  If you wanted to find a lost city or something like that, you couldn’t just jump on Google Earth and do satellite reconnaissance and then fly directly there in a helicopter. 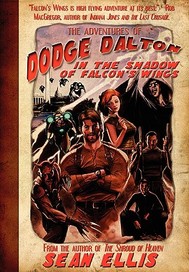 That fascination for the time period, and the fact that I was making a serious bid to write for the (now mostly defunct) Indiana Jones novel series, led me to the pulps, and particularly Doc Savage.  I had a passing familiarity with pulp fiction, but once I started doing some research, I realized that there was a lot of potential for a new pulp renaissance, not just in terms of content, but in the way books are published.

I had the idea to launch a series where several authors would be working simultaneously to produce titles for a single series—much like Charles Ardai did with the Gabriel Hunt series a few years later—and so I enlisted some friends to help me draw up the characters and brainstorm some plots.  My original dream didn’t quite happen as planned, but the process got the ball rolling creatively.

The concept that came out of that mix was a passing of the torch story loosely based on Doc Savage.  The pitch went something like this: An evil force is rising and the world needs its greatest hero…but he’s been missing for years.  A young journalist tracks down the hero’s associates in an effort to find the missing hero, battling the villains every step of the way, and eventually becomes the world’s new champion.

As much as I was influenced by the Doc Savage concept, I didn’t want my hero to be larger-than-life.  Instead of being a war-hero, surgeon, inventor, etc. with unlimited resources, he would be young and inexperienced, but intelligent and resourceful enough to outwit the villains and earn the respect of the old champion’s team of seasoned veteran adventurers.”

The desire to be an adventurer and a writer perhaps is the biggest connection between Ellis and Dalton.

“One of my favorite tropes has always been the writer as protagonist.  I like the idea of the writer trying to imitate his literary creations, probably because my childhood dream was to be a writer/adventure hero.

In the story, Dodge is a sportswriter for a New York newspaper, who get tapped to ghostwrite stories about a war hero named Captain Falcon, as told by one of Falcon’s purported associates, “Hurricane” Hurley.  Dodge thinks that stories are fiction, or at the very least exaggerated from a factual account, so he writes them that way, and they become a runaway success.  The idea of becoming an adventurer is that last thing on Dodge’s mind…at least until the bad guys show up, demanding to square off with Captain Falcon.

I suppose in that respect, I’m quite a bit different than Dodge. One of my earliest sources of inspiration as a writer was Clive Cussler.  I still remember reading the bio in one of his early novels; it talked about how he spent his free time searching for shipwrecks and lost mines, just like his hero Dirk Pitt. When I read that, I knew what I wanted to be when I grew up.  And while I haven’t found any lost cities, I have managed to have a few adventures along the way, and I’d like to think some of that comes through in my novels.”

While Sean didn’t divulge any details of his own adventures, his experiences definitely help color his action scenes.
“There are some scenes in the first Dodge Dalton novel where Dodge is underwater and trying to get back to the surface; when I write that, I try to tap in on my own memories of making some deep free dives and thinking: ‘Why is it taking so long to get to the surface? I really need to breathe…starting to panic a little.’ I like to get a little of that adrenaline rush onto the page. You don’t really get that from watching a movie, where the hero–Bond or Indy–can calmly react to whatever life-threatening situation comes along.”

Both books are available on amazon.com.