NEW COLUMN ON THE LINK BETWEEN PULP AND COMICS-MAKE THE COMICS CONNECTION!

THE COMICS CONNECTION-A column discussing, exploring, and theorizing about the link between Pulp and Comics- By Joshua Pantalleresco

GREEN LANTERN-PULP THROUGH A COMIC LENS?

Green Lantern is one of the richest concepts in superheroes. I mean, just how awesome is it to talk about someone that has a ring that can make any wish come true as long as you have the willpower for it? 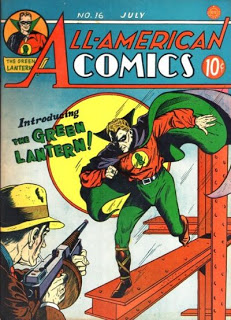 The concept has evolved since the beginning. Before there was Abin Sur, before the guardians, the corps, Sinestro and all the mythology we know today, Green Lantern was originally a riff on Aladdin. It was a magic ring that was part of an old Chinese prophecy. It came to earth in the form of a meteor, promising three things; death, life, and power. The meteor killed a village, restored a man to sanity, and finally fell into the hands of our hero.

In the wake of a train wreck caused by one of Alan Scott’s competitors during a trial, Alan finds a lantern and by talking to the green flame inside it he learned how to make a ring. He fashions a costume and seeks revenge of Dekker, the man that sabotaged his train. After defeating him, Alan Scott feels the call of destiny and decides to become a hero. He forges his costume and becomes the Green Lantern. 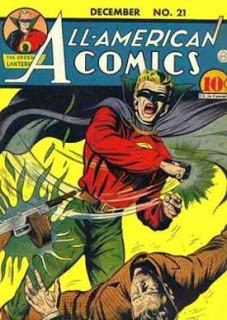 Like the Shadow or Batman before him, Alan emerges from the tragedy a changed man. He becomes a larger than life figure and battles the underworld, whether they were mobsters or the truly villainous Solomon Grundy.

That isn’t to say there wasn’t a light hearted side to the character. When he first moved to Gotham City, Alan Scott met Dolby Dickles, who would become his sidekick and drove a cab named “Goitrude”, a rocket powered cab, which would signal emergencies to the Green Lantern. A lot of these stories were more light hearted and fun. Dolby added much needed levity to the series when needed.

Contrary to the space stuff in the more modern incarnations, the original Green Lantern dealt with more traditional crime or adventure stories with a touch of the supernatural. It wasn’t until the sixties until we came closer to the concepts we know and love today. 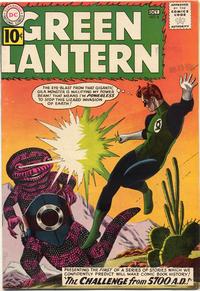 Hal Jordan is a test pilot that finds an alien spaceship crash landing to earth. Inside, a mortally wounded Green Lantern, Abin Sur, tells Hal that he has been chosen to be a Green Lantern. With his sidekick, Tom Kalamaku, mechanic and able bodied assistant, Hal battled foes such as Hector Hammond, Sinestro, Star Sapphire, Doctor Polaris.

This version of Green Lantern has more similarities to The Lensmen than say The Shadow. The two strongest connections are The Green Lantern Corps and the Guardians of the Universe. While they don’t try to breed a solution to their problems, the Guardians do share the evolved tendencies of the Arisians and the mental energies projected by the Arisians could be similar to the energy projected by both the guardians and the power rings.

As for the Corps themselves, they are at the very least influenced by the Lensmen. Although DC initially denied it, two corps members were named Arisia and Eddore in honor of the Lensmen series. Arisia still appears regularly in the pages of Green Lantern.

Through many revamps and reincarnations, Green Lantern’s mythology has grown and expanded into what we know and love today, the concept both from its beginnings with Alan Scott, to today with Hal Jordan, Kyle Rayner and company can trace its roots back to a pulpy beginning. 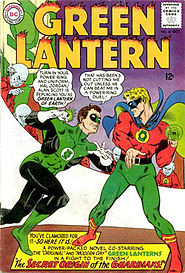