BULLDOG DRUMMOND ON THE BBC! 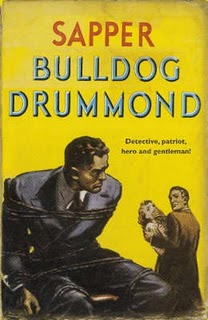 Sapper’s BULLDOG DRUMMOND, ex-military man turned adventurer, is coming to BBC Radio on Tuesday, August 9th 2011. An adventure in six parts, read by Julian Rhind-Tutt, the episodes will air in chronological order all week, and will be available on BBC iPlayer for those of you unlucky enough not to be British.