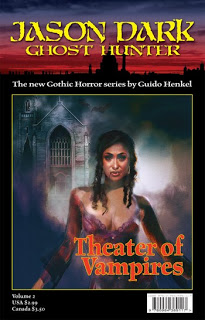 Having enjoyed Demon’s Night despite not having much of an emotional connection with the investigating Protagonist Jason Dark, I was looking forward to reading Theater of Vampires. Already comfortable with Henkel’s writing style, I was excited to see his take on everyone’s favourite creatures of the night. So I dived head first back into his dark, foggy world. With familiar characters reappearing for your nostalgic pleasure and new ones shuffling their way in. I was left feeling pleasantly surprised and sad that it ended so quickly.
The second book in a Series is a hard one to tackle. There’s the worry of not being able to keep up the excitement from the first or keep the characters true to themselves without endangering the plot. And to tackle possibly the most over-done creature in horror literature takes guts.
The story was fast paced and hard hitting. The characters were all believable and fear quickened the pace of my heart when the creatures of the night appeared from behind their human masks.
The setting was indeed creepy but I was beginning to worry that it sounded an awful lot like a particular vampire story many of us know. The last half of Anne Rice’s Interview with the Vampire took place in a theater, where Armand and his un-dead family tricked their human audience into believing the death performed on stage was acted, when in fact it was not. But, just before the book takes a turn away from following Rice’s footsteps a comment from Selene, the supposed master of the vampires, says, “I swear, I couldn’t bear another one like that insufferable blonde French guy De Lioncourt.” Which, of course, is a nod to Lestat. I had to place my cup of tea on the bedside table very carefully and hope that I didn’t choke on the gulp I’d just swallowed. There was another nod to a classic vampire at the very end but I will not say for fear of giving away anything inside the plot. All that will be said about it is it was a very, very good last line. One that left a mark, so to speak.
If there was any complaint to be had about this novella it’s that Sui Lin, Dark’s young, beautiful accomplice is so skilled in the art of fighting that it almost seems as though Dark himself falls behind. It happened in Demon’s Night and again in Theater of Vampires and no matter how much I love the strong, female character I worry that the series should be renamed A Sui Lin Supernatural Mystery.
With a great twist at the end that leaves you with many questions, for Dark’s future, moral rules and how the rest of the stories will unfold if the conflict were to raise it’s head once more. That is the wonderful thing about a series of stories, when you read the next instalment it’s like slipping into a pair of comfy slippers.
Share