Marvel Comics released a wide variety of posters at the San Diego Comic-Con this weekend with Chris Evans as Captain America, Robert Downey Jr. as Iron Man, Chris Hemsworth as Thor, Jeremy Renner as Hawkeye, Scarlett Johannson as the Black Widow, Mark Ruffalo as the Hulk, Samuel L. Jackson as Nick Fury, Clark Gregg as Agent Phil Coulson, and Cobie Smulders as Agent Maria Hill, all in advance of the May 2012 release of the Avengers movie directed by Joss Whedon, and all making a giant poster after it’s all, ahem, assembled. 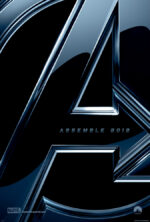