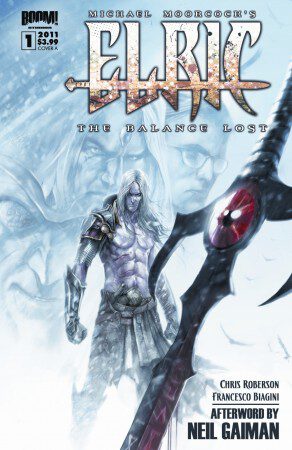 Increasingly, publishers are making their titles available in digital form the day the print version hits shops. Today’s release from BOOM! is just the latest in this trend. Some retailers accept it as an inevitable realty, others cry about it. What do you, the readers, think?

PHILADELPHIA — Taking another step toward offering comics in stores and digitally on the same day, publisher BOOM! Studios says its new series, Elric: The Balance Lost will do just that.

The series, written by Chris Roberson and drawn by Francesco Biagini, is based on author Michael Moorcock’s fan-favorite fantasy hero Elric of Melnibone.

The book will be on sale in comic book shops Wednesday, but will also be available for download through BOOM! Studios own comics app and comiXology’s app, too. Unlike other publishers, however, the issue’s 10-page prelude will also be accessible on its own website at no cost.

“With Elric we’re not only focusing on print and mobile devices exclusively but getting out onto Internet browsers that billions of people use every day,” BOOM!’s marketing and sales director Chip Mosher said of the comic, which will retail for $3.99 in print and digital form.

“While there are only 25 million iPads out in the marketplace, there are billions of potential readers that have the ability to find comic books through the Internet,” he said.

Offering comics digitally and in stores on the same day is growing among publishers, with more and more of them embracing it as readers opt to read issues on tablets, smart phones and personal computers.

BOOM! first did so in January 2008 with the debut of its “North Wind” title and again a year later with “Hexed.”

At the end of May, DC Comics said it would start selling digital copies of its printed ongoing superhero titles through apps and a website the same day they’re released in comic shops, a move dubbed by the industry as day-and-date sales. That will affect the company’s superhero titles.

Similarly, Archie Comics began same-day digital and print sales in April, along with other smaller publishers.