A Look Back at the First Captain American Feature Film 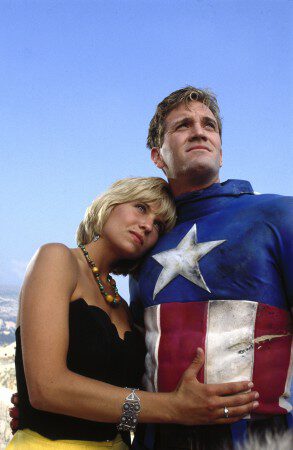 Marvel has been touting the July 22nd release of Captain America: The First Avenger, and has focused all their efforts on the latest entry in the Marvel Film Universe. What they don’t talk about are the previous screen incarnations of the Star-Spangled Avenger. Beyond the Lawrence-Gantry animated series of the 1960s, there were several telefilms on CBS featuring Reb Brown in a modified outfit that looked borrowed from Evel Keneval.

There was also, the 1990 movie that bizarrely featured the Red Skull as an Italian fascist. Poor Matt Salinger donned the chainmail but never quite looked comfortable. What’s amazing is that the screenplay by Stephen Tolin is based on a story he crafted with acclaimed crime novelist Lawrence Block. Clearly, he did it for the bucks.

Thankfully,  Twentieth Century Fox Home Entertainment’s “manufacturing on demand” program is making this forgotten film available just days before the new release. A part of MGM’s Limited Edition Collection, the low-budget offering stars Salinger (What Dreams May Come), Ned Beatty (Superman), Darren McGavin (The Night Stalker), Michael Nouri (Flashdance), Melinda Dillon (Close Encounters of the Third Kind) and Kim Gillingham (One Big Family).  The DVD will be available for sale on online retailers everywhere. We provide you with a trailer to remind you of what the film looked like.

During World War II, a brave American soldier (Salinger) volunteers to undergo experiments to become a new super-soldier, codenamed “Captain America.”  Infiltrating Germany to sabotage Nazi rockets pointed at the U.S., Captain America faces off with Nazi superhuman warrior Red Skull (Scott Paulin, The Right Stuff) who defeats the hero, throwing him into suspended animation.  Frozen for 50 years, Captain America is found and revived only to find that Red Skull has changed identities and has targeted the President of the United States (Ronny Cox, RoboCop) for assassination.  With America on the verge of utter chaos, it is up to one man to save the day!