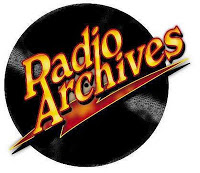 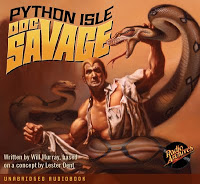 The greatest pulp fiction hero of the 1930s is back in the first of a new series of thrilling audiobooks!
For over 80 years, the name Doc Savage has meant thrills and excitement to millions of readers worldwide. Now, for the very first time, the legendary Man of Bronze comes to vivid life in “Python Isle”, the first audiobook adventure from RadioArchives.com.
In “Python Isle”, a long-lost pioneer flyer returns to civilization accompanied by an exotic woman who speaks in a lost tongue. From his towering skyscraper headquarters in New York, through a dangerous Zeppelin journey to Cape Town, climaxing on a serpent-haunted island in the forbidden reaches of the Indian Ocean, Doc Savage and his iron comrades race to untangle a weird puzzle so deep that the only clues can be found in the Bible!
Written by Will Murray and produced and directed by Roger Rittner – the same team that created “The Adventures of Doc Savage” radio series – “Python Isle” features dramatic narration by Michael McConnohie, cover art by Joe DeVito, and two exclusive audio interviews with Will Murray on the history of Doc Savage and the discovery of Doc Savage creator Lester Dent’s long lost manuscripts.

“Python Isle”, available as an 8-CD set priced at $25.98 or as an 8-hour digital download priced at $17.98, is the first in a new pulp fiction audiobook series from RadioArchives.com. Upcoming releases will feature the classic adventures of The Spider, Secret Agent “X”, and all seven of Will Murray’s exciting Doc Savage adventures. 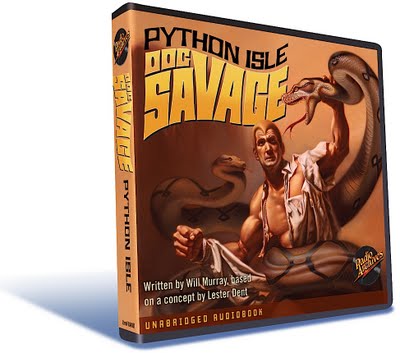